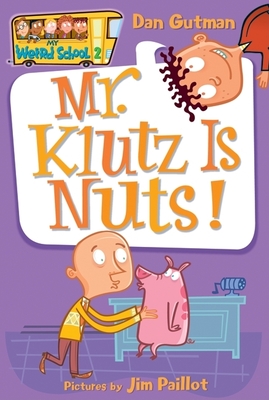 This is book number 2 in the My Weird School series.

In the second book of the original My Weird School series, Principal Klutz goes nuts! He wants to climb to the top of the Ella Mentry School flagpole. He even kissed a pig on the lips and painted his bald head orange. And now he wants to bungee jump off the roof of the school dressed as Santa Claus!

Perfect for reluctant readers and word lovers alike, bestselling author Dan Gutman’s insanely popular My Weird School series has something for everyone. Don’t forget to join A.J. and the gang on the rest of their hilarious adventures.

” … an easy chapter book that will satisfy newly confident as well as reluctant readers who ask for funny books.” — School Library Journal