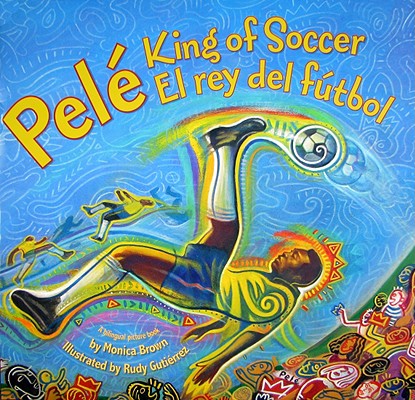 This acclaimed bilingual children’s book, Spanish/English, is a fun way to introduce simple words and phrases in both languages and is sure to be a welcome resource at home and in schools and libraries.

Monica Brown and Rudy Gutierrez team up to deliver what Kirkus called, in a starred review, an “inspiring blend of art and story,” about the most famous soccer star in the world, Pelé.

This bilingual picture book will inspire, teach, and amaze readers as they learn about the man who revolutionized the sport of soccer.

Do you know how a poor boy from Brazil who loved fútbol more than anything else became the biggest soccer star the world has ever known? This is the true story of Pelé, King of Soccer, the first man in the history of the sport to score a thousand goals and become a living legend.

Monica Brown is the author of Pele, King Of Soccer/Pele, El rey del futbol and Side by Side/Lado a lado as well as the Pura Belpre Honor winners My Name is Celia/Me llamo Celia and My Name Is Gabito/Mi Llamo Gabito. Monica lives in Flagstaff, Arizona, with her husband and two daughters.

Rafael Lopez is the award-winning illustrator of My Name is Celia/Me llamo Celia and Book Fiesta! Rafael divides his time between his studios in the colonial town of San Miguel de Allende, Mexico, and a loft in downtown San Diego, where he works and lives with his wife and son.

Rudy Gutierrez spent many days playing stickball and cards with his father and listening to stories about his life. Rudy's memories of his dad's character, honesty, and optimism inspired his illustrations in this book.

Rudy teaches at the Pratt Institute. He received a Gold Medal from the Society of Illustrators and was commissioned to do art for the acclaimed Santana Shaman CD cover. He also illustrated Malcolm X, an ALA Notable Children's Book. Rudy lives in Bogota, New Jersey.

“Pulsing prose that is a pleasure for the adult on readaloud duty to deliver. Gutiérrez matches aural with visual delight in mixed-media double page spreads that sizzle with energy.” — Bulletin of the Center for Children’s Books

“Gutiérrez’s illustrations give the book an exciting burst of energy. The pages convey the vigor and panache of World Cup Soccer. Text and pictures collaborate seamlessly.” — School Library Journal

“With great skill, Brown tells the story of the poor boy from Brazil who loved fútbol more than anything else and became the biggest soccer star the world has ever known.” — NBCLatino.com

“Any kid who loves soccer should know the legend of Pelé. A Brazilian boy who practiced soccer barefoot because he couldn’t afford shoes grew up to be one of the greatest soccer players on earth, leading his team to the World Cup finals. Bonus, it’s bilingual.” — Brightly