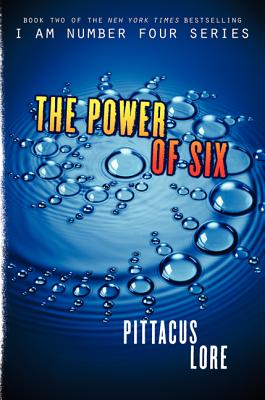 This is book number 2 in the Lorien Legacies series.

The second book of the #1 New York Times bestselling I Am Number Four series!

In the beginning, nine aliens left their home planet Lorien when it fell under attack by the evil Mogadorians. They scattered on Earth and went into hiding. They look like ordinary teenagers but have extraordinary powers. The Mogs have come for them. They killed Number One in Malaysia, Number Two in England, and Number Three in Kenya. They tried to get John Smith, Number Four, in Ohio—but they failed.

Now John has joined forces with Number Six, and they are on the run. But they are not alone. Already John and Six have inspired Marina, Number Seven, who has been hiding in Spain. She’s been following the news of what’s happening, and she’s certain this is the sign she’s been waiting for. It’s time to come together.

Michael Bay, director of Transformers, raved: “Number Four is a hero for this generation.” This epic story is perfect for fans of action-packed science fiction like The Fifth Wave series by Rick Yancey, The Maze Runner series by James Dashner, and Orson Scott Card’s Ender’s Game.

Don’t miss the first book in the brand-new I Am Number Four spin-off series: Generation One.

“The action is taut, the characters are fascinating, and the fact that the teens are slowly finding one another and learning about Lorien secrets is sure to yield an impressive all-out battle down the road. This series continues to head in interesting directions.” — Bulletin of the Center for Children’s Books

“Lore picks up and expands on a strong premise that originated in the first novel. An intriguing potential romantic triangle brewing between John, Six, and Sam adds layers as they search for answers.” — Voice of Youth Advocates (VOYA)

Praise for I AM NUMBER FOUR: “Number Four is a hero for this generation.” — Michael Bay, director of Transformers

“There’s genuine suspense…it’s easy to get lost in the world of the sweet teen from another planet.” — Chicago Tribune

“This is a can’t-put-it-down book.” — Justine Magazine

“The intense pace, bigger-than-life fight scenes, and good vs. evil showdown set up a series that will easily draw in action-oriented sci-fi fans, who will eagerly await the next round.” — Bulletin of the Center for Children’s Books

“A breathless page-turner of a sci-fi novel that will have readers rooting for the teen alien who must save himself, his human friends, and the planet. So, gear-up sci-fi fans, the battle for Earth is on and there’s a new kid in town!” — Amazon.com