Grand Forks: A History of American Dining in 128 Reviews (Paperback) 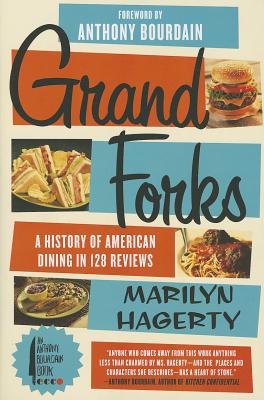 Once upon a time, salad was iceberg lettuce with a few shredded carrots and a cucumber slice, if you were lucky. A vegetable side was potatoes—would you like those baked, mashed, or au gratin? A nice anniversary dinner? Would you rather visit the Holiday Inn or the Regency Inn? In Grand Forks, North Dakota, a small town where professors moonlight as farmers, farmers moonlight as football coaches, and everyone loves hockey, one woman has had the answers for more than twenty-five years: Marilyn Hagerty. In her weekly Eatbeat column in the local paper, Marilyn gives the denizens of Grand Forks the straight scoop on everything from the best blue plate specials—beef stroganoff at the Pantry—to the choicest truck stops—the Big Sioux (and its lutefisk lunch special)—to the ambience of the town's first Taco Bell. Her verdict? "A cool pastel oasis on a hot day."

No-nonsense but wry, earnest but self-aware, Eatbeat also encourages the best in its readers—reminding them to tip well and why—and serves as its own kind of down-home social register, peopled with stories of ex–postal workers turned café owners and prom queen waitresses. Filled with reviews of the mom-and-pop diners that eventually gave way to fast-food joints and the Norwegian specialties that finally faded away in the face of the Olive Garden's endless breadsticks, Grand Forks is more than just a loving look at the shifts in American dining in the last years of the twentieth century—it is also a surprisingly moving and hilarious portrait of the quintessential American town, one we all recognize in our hearts regardless of where we're from.

Marilyn Hagerty has been writing for the Grand Forks Herald since 1957. She currently writes five columns a week for the paper, including That Reminds Me for the Tuesday editorial page, Eatbeat for the Wednesday food page, and personal columns for Thursday, Friday, and Sunday. She lives in Grand Forks, North Dakota.