Act Like a Lady, Think Like a Man, Expanded Edition: What Men Really Think About Love, Relationships, Intimacy, and Commitment (Paperback) 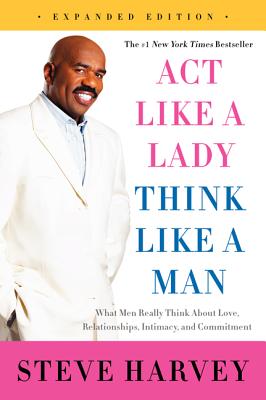 With over two million copies sold, Act Like a Lady, Think Like a Man has become a bestseller around the world. In conjunction with its second movie sequel to be released this summer, Steve Harvey has updated his classic with new advice and insights.

Whether it’s why women should enforce a “90-Day Probation Period” before they give their men sexual “benefits”—the way Ford motor company withholds medical and dental benefits until an employee has been on the job for 3 months—or explaining to women why men would rather “fix it” than talk about it, Steve Harvey’s advice is always spot-on and laden with warmth and humor. But behind the laughter is his sincere desire to help women understand men.

Now, Steve shares even more relationship wisdom. Does it feel like your man’s friends are against you? What should you know about being a wife, before you say “I Do”? Steve provides the answers to these questions and more, and offers new insights including:

With liberal use of his own adventures in love and courtship, Act Like a Lady, Think Like a Man is an honest, compelling, and realistic examination of how men think about love and sex and what women need to know so that they can set realistic expectations of the men in their life.

The author of Act Like a Success, Think Like a Success; Act Like a Lady, Think Like a Man; and Straight Talk, No Chaser, Steve Harvey began doing stand-up comedy in the mid-1980s. His success as a stand-up comedian led to the WB’s hit show The Steve Harvey Show, which has won multiple NAACP Image Awards. He was featured in Spike Lee’s film The Original Kings of Comedy. In addition to his nationally syndicated Steve Harvey Morning Show, Steve hosts a daily talk show on NBC, is the gameshow host for Family Feud and Celebrity Family Feud, and most recently NBC’s top rated new show, Little Big Shots. A philanthropist, he is the founder of the Steve and Marjorie Harvey Foundation. He lives in Atlanta, Georgia and Chicago, Illinois.