Game-Day Eats: 100 Recipes for Homegating Like a Pro (Hardcover) 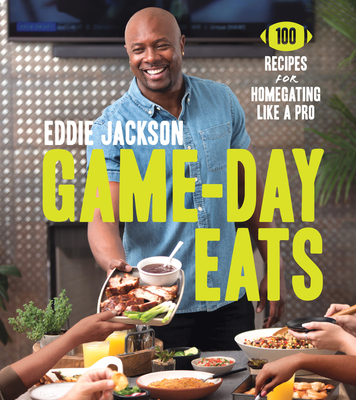 Create epic feasts for game days at home with this full-color cookbook from former NFL star and celebrity chef Eddie Jackson that includes 100 fresh and inventive recipes for tailgating at home.

There’s nothing like day full of football and great food. While many fans tailgate on game days—gathering in the stadium parking lot to grill and eat with family and friends—the real fun of the weekend for former pro-football star and celebrity chef Eddie Jackson is “homegating”: throwing a party in your own living room or den. With homegating, the party doesn’t have to stop once the game starts.

Game-Day Eats combines Eddie’s two greatest passions—cooking and football—in one hearty cook’s playbook. Eddie gives you  100 recipes centered around eating, drinking, and spending time with friends while enjoying the game in your own space. The key to a great homegate is food that can be cooked while spending time with your guests. Because you’re cooking in your own kitchen, you can go way beyond brats, chili, and cheeseburgers. With Game-Day Eats you can enjoy mouthwatering Roasted Herb Wings and Chipotle Rib Nachos as well as fun surprises like Jalapeño Honey Chicken Biscuit Sliders and Citrus Beer Floats.

Eddie shows how anyone at any culinary skill level can create festive feasts any day of the week. Each inventive and hearty recipe includes steps that can be done ahead of time or prepped very quickly so that you never have to miss a play—whether you're gathering for a traditional Sunday afternoon or for a weeknight game. With influences from Eddie's international culinary escapades and pro days traveling the country, and illustrated with 150 mouthwatering full-color photos, the food in Game-Day Eats is sure to win over your favorite crowd.

Eddie Jackson is a former NFL player turned celebrity chef and owner of Rosehill Beer Garden and Food Truck Park located in Houston, Texas. After winning the 2015 season of The Next Food Network Star, he became a beloved member of the Food Network family and has been the face of several shows including BBQ Blitz, Kids BBQ Championship, Christmas Cookie Challenge, and Cooking Channel's Yum and Yummer, as well as Eddie Jackson’s Game-Day Playbook on foodnetwork.com.