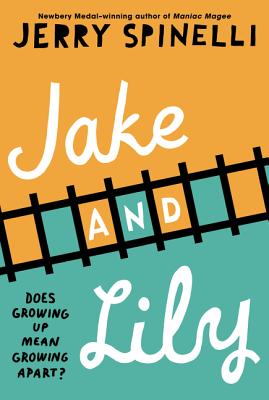 “This lovely story about the special bond between twins is unlike anything Jerry Spinelli has ever written. The twins tell their story in alternating chapters. Jake and Lily have always known each other's thoughts. Even stranger, they both sleepwalk to the train station every year on their birthday. But now that they're 11, things seem to be changing. Jake starts hanging out with a neighborhood gang, leaving Lily behind. Will Jake's new friends get him into trouble? Will Lily find a friend of her own? And more importantly, does growing up mean growing apart? A bright and breezy story full of Spinelli's trademark humor, with an ending that is absolutely perfect.”
— Joanne R. Fritz, Chester County Book & Music Company, West Chester, PA

Jake and Lily are twins. Despite their slightly different interests and temperaments, they feel exactly the same—like two halves of one person.

But the year they turn eleven, everything changes. Their parents announce it’s time for separate bedrooms. Jake starts hanging out with a pack of boys on the block. And Lily is devastated, not to mention angry. Who is she without Jake?

And as her brother falls under the influence of the neighborhood bully, he also must ask himself—who is the real Jake?

In a starred review, Publishers Weekly praised this "smart and funny story." The New York Times Book Review extolled Jerry Spinelli as "a poet of the prepubescent" and added: "Nobody is better than Spinelli when it comes to creating the grade-school world of qualified innocence—and treading a fine line between challenge and reassurance.”

Jerry Spinelli received the Newbery Medal for Maniac Magee and a Newbery Honor for Wringer. His other books include Stargirl; Love, Stargirl; Smiles to Go; Loser; Jake and Lily; Hokey Pokey; and The Warden’s Daughter. His novels are recognized for their humor and poignancy, and his characters and situations are often drawn from his real-life experience as a father of six children. Jerry lives with his wife, Eileen, also a writer, in Wayne, Pennsylvania.

“Spinelli is a poet of the prepubescent…Nobody is better than Spinelli when it comes to creating the grade-school world of qualified innocence—and treading a fine line between challenge and reassurance.”
— New York Times Book Review

“Each character is portrayed with emotional subtlety and conviction, while their juxtaposed viewpoints bring the energy of opposing forces to the story.”
— Booklist

“Spinelli’s hallmark issues—individuality, nonconformity, alienation, standing up for the little guy—figure prominently, and the messages are convincingly worked into the story.”
— Horn Book Magazine