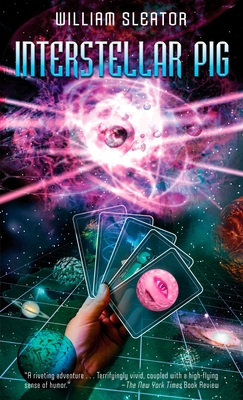 When three unusually attractive young adults rent the summer cottage next door, Barney's boring vacation at the beach seemingly takes a turn for the better. However, after the neighbors unwittingly reveal their extraterrestrial identities, the board game they have taught him becomes a real-life battle, and Barney must outsmart the aliens to save Earth from destruction. The fantastical tale contains some of Sleator's most inventive characters.

"I typed my first story when I was six -- the beginning of my dependence on keyboards. It was called "The Fat Cat," and it read: "Once there was a fat cat. boy was she fat. Well, not that fat. But pretty fat." Even then, I needed an editor.

From that point on, I was always writing or composing something. And almost from the very beginning, I was fascinated by the grotesque and macabre. One of my first musical compositions was called "Guillotines in the Springtime." At school, when we were assigned to write a story about a holiday, I always cane up with something like "The Haunted Easter Egg."

In high school I continued writing poems and stories and composing music. When the school orchestra played one of my compositions at an assembly, everybody thought I was a genius. I did nothing to correct this impression. I went to Harvard, where I was miserable -- and wrote intensely tragic novellas, as well as music for student films and plays.. I also kept a voluminous journal, hundreds of single-spaced typed pages.. I gave them different volume titles like Rats Live on No Evil Star. (That's a palindrome.) I told that journal everything, and most of it is drivel. But it was a lot cheaper than going to a psychotherapist, and maybe I'll get some usable material out of it someday.

After college I spent a year in England, where I studied musical composition and worked as a pianist at the Royal Ballet School. It was there that I had the experiences which later became my first YA novel, Blackbriar. I really did live in the middle of a forest in an ancient cottage that once had been a pest house for people with small pocks. Because I was still keeping journal, I put all the details down on paper. Back in the States, I turned the journal into a book, and I was lucky -- because the manuscript was rejected by only one publisher. The second editor who saw it, Ann Durell at Dutton, liked it enough to work with me on it through a couple of drafts, until finally she felt it was good enough for publication and offered me a contract.

My second novel, Run, also took place in a house I had lived in. After that, I ran out of interesting real places to write about. I saw if I was going to make my living as a writer, I was going to have to begin making things up, using my imagination. The result was my first science fiction book, House of Stairs. Although I invented the plot and the setting, the characters in that book were all based on people I knew. I continue to use real people in my books, and that has gotten me into trouble at times. Fortunately, most of my friends have started speaking to me again.

Gradually, without much planning on it, I began drifting more and more into science fiction, a genre I had always loved. A lot of the fun of writing science fiction is learning about real scientific phenomena, like behavior modifications or black holes or the fourth dimension, and turning them into stories. The challenge is to try to make the parts you invent as believable as the scientific laws you are using. If you succeed, then you are giving the reader something that is magical and fantastic but at the same time might actually be possible.. That's the great thing about science fiction -- someday it could really happen.

For nine years, I also worked as a rehearsal pianist for the Boston Ballet, touring with them all over Europe and the United States, and composing three ballets that the company performed. (One of them was called Incident at Blackbriar, a nice plug for my book.) Eventually I quit because it was taking too much time away from my writing, and partly because the stressful atmosphere of a ballet company began to get to me. One of the best things about being a writer is that it's a job without a lot of stress. But I did keep notes of everything that happened: the time Giselle's house tipped over and knocked a dancer out cold, the time a dancer fell into the orchestra pit, what it was like to perform in ancient Roman amphitheaters in the rain, the kinds of things dancers say to each other onstage. I continue trying to turn it all into a book, and someday I may do it.

Now I live part of the year in Bangkok, Thailand, and part of the year in Boston. I write full- time and do a lot of serious cooking. I consider myself extremely fortunate to be able to make a living as a writer. I shouldn't ever run out of ideas -- knock on wood -- since the universe is full of great things like strange attractors and the Mandelbrot set. I still can't get over the fact that time slows down in the presence of a gravitational field. It really does, you know. That's not science fiction. It's a fact."

Barney is all set to spend two weeks doing nothing at his parents summer house.  But then he meets the neighbors, and things start to get interesting.  Zena, Manny, and Joe are not your average folks on vacation.  In fact, Barney suspects they're not from Earth at all.  Not only are they physically perfect in every way, but they don't seem to have jobs or permanent addresses, and they are addicted to a strange role-playing game called Interstellar Pig.  As Barney finds himself sucked into their bizarre obsession, he begins to wonder if Interstellar Pig is just a game.