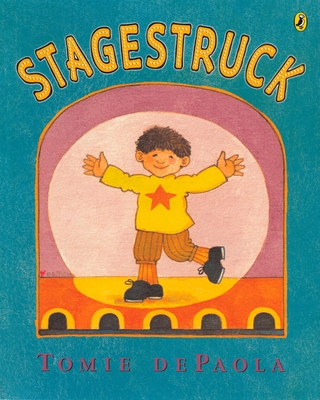 Tommy is so excited. His first-grade class is putting on a play about Peter Rabbit, and he’s sure to get the starring role. But in his enthusiasm, Tommy talks too much in class, so his teacher decides that he should play Mopsy instead—and Mopsy doesn’t have any lines! Tommy is disappointed until he gets an idea. If he can’t be the star, he can still get the audience’s attention by reacting to everything Peter Rabbit does. But how will Tommy’s mother and teacher react to his performance?

Tomie dePaola was born in Meriden, Connecticut, in 1934, to a family of Irish and Italian background. His determination to create books for children led to a BFA from Pratt Institute in Brooklyn, New York, and an MFA from the California College of Arts & Crafts in Oakland, California. His particular way with color, line, detail, and design have earned him many of the most prestigious awards in his field, among them a Caldecott Honor Award for Strega Nona, the Smithsonian Medal, the Kerlan Award from the University of Minnesota for his "singular attainment in children's literature," the Catholic Library Association's Regina Medal for his "continued distinguished contribution," and the University of Southern Mississippi Medallion. He was also the 1990 United States nominee for the Hans Christian Andersen Medal for illustration, and received the Children's Literature Legacy Award for lifetime contribution to children's literature in 2011.
DePaola has published almost 200 children's books in 15 different countries over the past 30 years. Among his most well-known titles are the Strega Nona series, 26 Fairmount Avenue, and The Legend of the Indian Paintbrush.
DePaola lives in an interesting house in New Hampshire with his four dogs. His studio is in a large renovated 200-year-old barn.