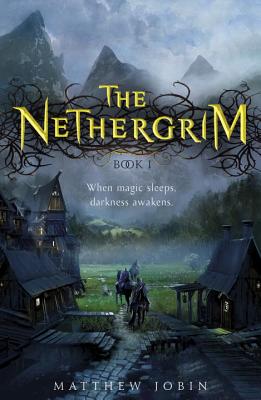 The Next Great Fantasy Epic is here! For fans of Ranger's Apprentice and the Chronicles of Narnia.

Everyone in Moorvale believes the legend: The brave knight Tristan and the famed wizard Vithric, in an epic battle decades ago, had defeated the evil Nethergrim and his minions. To this day, songs are sung and festivals held in the heroes' honor. Yet now something dark has crept over the village. First animals disappear, their only remains a pile of bones licked clean. Then something worse: children disappear. The whispers begin quietly yet soon turn into a shout: The Nethergrim has returned! Edmund’s brother is one of the missing, and Edmund knows he must do something to save his life. But what? Though a student of magic, he struggles to cast even the simplest spell. Still, he and his friends swallow their fear and set out to battle an ancient evil whose powers none of them can imagine. They will need to come together--and work apart--in ways that will test every ounce of resolve.

“This series starter is reminiscent of epic fantasy series such as C.S. Lewis’ The Chronicles of Narnia or J.R.R. Tolkien’s The Lord of the Rings. The characters are strongly drawn and . . . [t]here is a compelling blend of magic, romance, looming evil, and noble sacrifice.--VOYA

“The Nethergrim reminded me of a cross between The Lord of the Rings and Harry Potter. . . I would really like to see this one on the big screen.” –Brodart’s Library Services

"Entertainingly told with many unique features, The Nethergrim reads like a classic.” –Recommended by Richard C., Powells.com [Staff Pick at Powell’s Books]

“I’d go ahead and say everything about this book screams BLOCKBUSTER FILM.”—The Social Potato Reviews

"Fantasy fans will find much to enjoy in this elegant gem of a novel."--BCCB

"First in a planned trilogy, this is a solid debut for anthropologist Jobin, who steers clear of genre cliches while offering up a refreshingly metaphysical take on magic, a believably dark setting filled with unusual threats, and a seductive and manipulative villain."--Publishers Weekly

Matthew Jobin spent 25 years developing the Nethergrim's world--its story, present and past; its landscapes; its language. He was originally inspired as a boy exploring the forest surrounding his home in Canada, and has been intent on telling the tale ever since.

Matthew, who holds a Ph. D. in anthropology from Stanford University, now lectures at Santa Clara University and lives with his wife in the San Francisco Bay Area.

"[An] entertaining coming-of-age fantasy . . .this is a solid debut for anthropologist Jobin, who steers clear of genre clichés while offering up a refreshingly metaphysical take on magic, a believably dark setting filled with unusual threats, and a seductive and manipulative villain."--Publishers Weekly

"Jobin combines elements of suspense and mystery with a pervasive sense of impending doom in this opening volume of this trilogy."--SLJ

"The Nethergrim itself is indeed the stuff of nightmares, and Jobin judiciously doles out details about it, heightening suspense further . . . Fantasy fans will find much to enjoy in this elegant gem of a novel"--BCCB