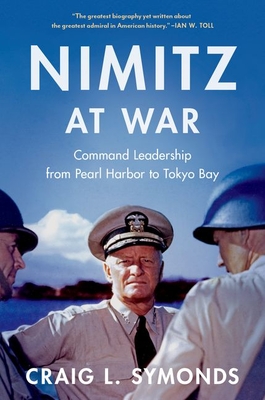 From America's preeminent naval historian, the first full-length portrait in over fifty years of the man who won the war in the Pacific in World War Two--destined, says Andrew Roberts, to be the defining life of Chester Nimitz for a long time to come. Only days after the Japanese attacked Pearl Harbor, President Franklin D. Roosevelt tapped Chester W. Nimitz to assume command of the Pacific Fleet. Nimitz was not the most senior candidate available, and some, including his new boss, U.S. Navy Admiral Ernest J. King, considered him a desk admiral, more suited to running a bureaucracy than a theater of war. Yet FDR's selection proved nothing less than inspired. From the precarious early months of the war after December 7th 1941 to the surrender ceremony in Tokyo Bay nearly four years later, Nimitz transformed the devastated and dispirited Pacific fleet into the most powerful and commanding naval force in history.
From the start, the pressures on Nimitz were crushing. Facing demands from Washington to mount an early offensive, he had first to revive the depressed morale of the thousands of sailors, soldiers, and Marines who served under him. He had to corral independent-minded subordinates--including Admiral Bill Bull Halsey and General Holland Howlin' Mad Smith--and keep them focused on shared objectives. He had to maintain a sometimes-fraught relationship with his Army counterpart Douglas MacArthur, and cope with his superiors, including the formidably prickly King and the inscrutable FDR. He had to navigate the expectations of a nation impatient for revenge and eventual victory. And of course, he also confronted a formidable and implacable enemy in the Imperial Japanese Navy, which, until the Battle of Midway, had the run of the Pacific.
Craig Symonds' Nimitz at War reveals how the quiet man from the Hill Country of Texas eventually surmounted all of these challenges. Using Nimitz's headquarters--the eye of the hurricane--as his vantage point, Symonds covers all the major campaigns in the Pacific from Guadalcanal to Okinawa. He captures Nimitz's composure, discipline, homespun wisdom, and most of all his uncanny sense of when to assert authority and when to pull back. In retrospect it is difficult to imagine anyone else accomplishing what Nimitz did. As Symonds' absorbing, dynamic, and authoritative portrait reveals, it required qualities of leadership exhibited by few other commanders in history, qualities that are enduringly and even poignantly relevant to our own moment.

Craig L. Symonds is Professor Emeritus at the United States Naval Academy, where he taught naval history for thirty years, including four years as History Department Chair. He also taught at Britannia Royal Naval College in Dartmouth, England. From 2017 to 2020 he was the Ernest J. King Distinguished Professor of Maritime History at the U.S. Naval War College. He is the author of seventeen books, including Decision at Sea, Lincoln and his Admirals, The Battle of Midway, Neptune: The Allied Invasion of Europe and the D-Day Landings, and, most recently, World War II at Sea: A Global History His works have been translated into several languages and received numerous awards, including the Lincoln Prize, the Roosevelt Prize, and the Dudley Knox Medal for Lifetime Achievement.