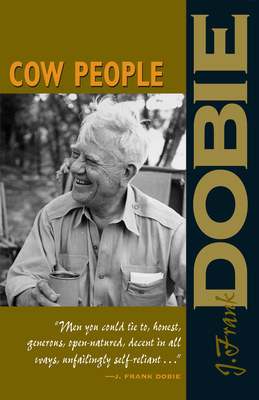 Cow People records the fading memories of a bygone Texas, the reminiscences of the cow people themselves. These are the Texans of the don't-fence-me-in era, their faces pinched by years of squinting into the desert glare, tanned by the sun and coarsened by the dust of the Chisholm Trail. Their stories are often raucous but just as often quiet as hot plains under a pale Texan sky.

A native Texan, J. Frank Dobie had an inborn knowledge of the men and customs of the trail camps. Cattlemen were as various as the country was big. Ab Blocker was a tall, quiet man who belonged totally to the cattle and the silent plains. But big men often had big lungs. "Shanghai Pierce was the loudest man in the country. He would sit at one end of a day coach and in normal voice hold conversation with some man at the other end of the coach, who of course had to yell, while the train was clanking along. He knew everybody, yelled at everybody he saw."

Texas bred tall men and taller stories. There was Findlay Simpson, who played havoc with fact but whiled away the drivers' long, lonely evenings with his tales. Old Findlay told of a country so wet that it bogged down the shadow of a buzzard, and of cattle that went into hibernation during rugged winters; he once spun yarns for three days straight, outlasting his listeners in a marathon of endurance.

All real cow people—from the cattle drivers to the cattle owners—lived by a simple code based on the individual's integrity. Bothering anyone else's poke or business uninvited was strictly forbidden, and enforcement of this unwritten law was as easy as pulling a trigger. Honesty was taken for granted, and a cowman's name on a check made it negotiable currency.

Yet Texas had its "bad guys"—the crooks, the thieves, even the tightwads. "A world big enough to hold a rattlesnake and a purty woman is big enough for all kinds of people," wrote Dobie. This is the world whose vast and various population the reader will find in Cow People.

J. Frank Dobie (1888–1964) was a folklorist and author of many books about Texas life and culture.