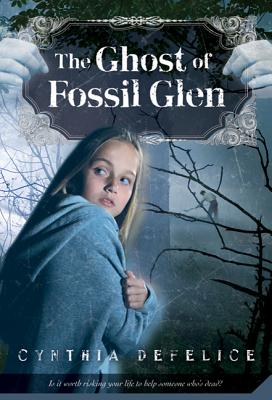 This is book number 1 in the Ghost Mysteries series.

The Ghost of Fossil Glen gripping ghost story and murder mystery by a popular and highly regarded author.

Allie Nichols knows she's being pursued by a ghost. But her friend Karen calls her a liar and doesn't want to hear "stuff like that." It is Allie's old pal Dub who listens eagerly as Allie tells him about a voice that guides her safely down a steep cliff side, the face in her mind's eye of a girl who begs "Help me," and a terrible nightmare in which that girl falls to her death. Who is the girl? Is she the ghost? And what does the ghost want from Allie?

As Allie discovers that her role is to avenge a murder, she also learns something about friendship, false and true, in the latest chilling tale from best selling author Cynthia DeFelice.

Cynthia DeFelice is the author of many bestselling titles for young readers, including the novels Wild Life, The Ghost of Cutler Creek, Signal, and The Missing Manatee, as well as the picture books, One Potato, Two Potato, and Casey in the Bath. Her books have been nominated for an Edgar Allan Poe Award and listed as American Library Association Notable Children's Books and Bank Street Best Children's Book of the Year, among numerous other honors. Cynthia was born in Philadelphia in 1951. As a child, she was always reading. Summer vacations began with a trip to the bookstore, where she and her sister and brothers were allowed to pick out books for their summer reading. “To me,” she says, “those trips to the bookstore were even better than the rare occasions when we were given a quarter and turned loose at the penny-candy store on the boardwalk.” Cynthia has worked as a bookseller, a barn painter, a storyteller, and a school librarian. When asked what she loves best about being an author, she can’t pick just one answer: “I love the feeling of being caught up in the lives of the characters I am writing about. I enjoy the challenge of trying to write as honestly as I can, and I find enormous satisfaction in hearing from readers that something I wrote touched them, delighted them, made them shiver with fear or shake with laughter, or think about something new.” Cynthia and her husband live in Geneva, New York.

“An imaginative and adventurous sixth grader makes a connection with the ghost of the victim of an unsolved murder and puts her own life in jeopardy to find the killer...Fans of ghost stories...will find this excellent book difficult to put down.” —Starred, School Library Journal

“[A] beautifully crafted thriller. . . . A dynamic page-turner that never gives readers the chance to become distracted or lose interest. It's another fine title from a fine author.” —Booklist