Eat Like a Human: Nourishing Foods and Ancient Ways of Cooking to Revolutionize Your Health (Hardcover) 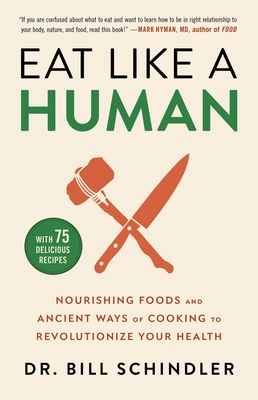 An archaeologist and chef explains how to follow our ancestors' lead when it comes to dietary choices and cooking techniques for optimum health and vitality. "Read this book!" (Mark Hyman, MD, author of Food)

Our relationship with food is filled with confusion and insecurity. Vegan or carnivore? Vegetarian or gluten-free? Keto or Mediterranean? Fasting or Paleo? Every day we hear about a new ingredient that is good or bad, a new diet that promises everything. But the secret to becoming healthier, losing weight, living an energetic life, and healing the planet has nothing to do with counting calories or feeling deprived—the key is re‑learning how to eat like a human.

This means finding food that is as nutrient-dense as possible, and preparing that food using methods that release those nutrients and make them bioavailable to our bodies, which is exactly what allowed our ancestors to not only live but thrive. In Eat Like a Human, archaeologist and chef Dr. Bill Schindler draws on cutting-edge science and a lifetime of research to explain how nutrient density and bioavailability are the cornerstones of a healthy diet. He shows readers how to live like modern “hunter-gatherers” by using the same strategies our ancestors used—as well as techniques still practiced by many cultures around the world—to make food as safe, nutritious, bioavailable, and delicious as possible.

With each chapter dedicated to a specific food group, in‑depth explanations of different foods and cooking techniques, and concrete takeaways, as well as 75+ recipes, Eat Like a Human will permanently change the way you think about food, and help you live a happier, healthier, and more connected life.

Dr. Bill Schindler is an internationally known archaeologist, primitive technologist, and chef. He founded and directs the Eastern Shore Food Lab with a mission to preserve and revive ancestral dietary approaches to create a nourishing, ethical, and sustainable food system and is an adjunct associate professor of archaeology at University College Dublin. His work is currently the focus of Wired magazine’s YouTube series, Basic Instincts and Food Science, and he co‑starred in the National Geographic Channel series The Great Human Race, which aired in 2016 in 171 countries. Dr. Schindler has also been featured on CNN, Maryland Public Television, NPR’s Weekend Edition and Here and Now, as well as on such podcasts as Milk Street Radio, Peak Human, and The Academic Minute. Dr. Schindler’s work has appeared in the Washington Post, The Atlantic, and the London Times, among other publications.

“If you are confused about what to eat, tossed about in the storm of conflicting dietary advice, Eat Like a Human provides a refreshing, unique perspective on the origins of the human diet, and how to design and prepare a varied inclusive diet of nutrient dense foods, often wild and weird, that extracts the most nutritional benefit through ancient cooking methods (and often ancient foods ignored today – insects anyone?). If you want to learn to be in right relationship to your body, nature and food, read this book!”—Mark Hyman, MD, New York Times-bestselling author of The Pegan Diet

“Dr. Bill Schindler is at the forefront of a small handful of intrepid researchers who have taken the deep insights of evolutionary science and wedded them to the practical (and critical) process of feeding ourselves, our families, and communities. Eat Like a Human is not ‘cave man reenactment’ — it is a science-based approach to truly nourishing the human body, mind, and spirit.”—Robb Wolf, New York Times-bestselling author of The Paleo Solution and Wired to Eat

“From Samburu warriors in Africa drinking blood milkshakes, to highlanders in Peru dipping potatoes in a sauce made of clay, Eat Like a Human takes you on a fascinating journey of culinary traditions around the world. Dr. Schindler explains why food preparation techniques are critical for obtaining the best possible nourishment for our food while providing delicious recipes acceptable to western palates. Eat Like a Human is a delightful read that serves as a practical road map to healthy eating.”—Sally Fallon Morell, President of the Weston A. Price Foundation

“Eat Like a Human will awake your latent hunter-gatherer. Dr. Schindler shares his intriguing journey from 'hard core obsessive' to the realization that food is more than nutrition — it's also a cultural experience that is invaluable to our health and happiness. A lifetime of discovery and invaluable forgotten skills between two covers.”—Darina Allen, founder of Ballymaloe Cookery School, and author of Grow Cook Nourish

“Dr. Bill Schindler dives into ancestral foodways, into the archeology of food, in order to draw a better future for our health as well as the health of our planet. He doesn't just preach the change in our eating behavior, he uses the world's simplest argument—eat like a human—to understand our DNA, our metabolic functions, and the evolution of our species in order to design a better, tastier, healthier, and more egalitarian future.”—Alex Atala, chef and author of D.O.M

“Archaeology too often fails to explore what our ancestors ate, overlooking the most fundamental part of the story of human evolution. This adventure-rich masterpiece explores living guardians of ancient culinary wisdom, filling a long-ignored void and prodding at the status quo of nutrition in a quietly powerful way.”

“Anthropologist Dr. Bill Schindler offers sage eating advice and recipes from our ancestors.  He encourages us to consider the cultural context of our consumption from surprising perspectives, with stories from his extensive travels to learn from indigenous peoples and their traditional diets. Bill invites us to eat dirt, not our greens; to reconsider nutrient-dense offal; and not to drink the USDA-recommended three glasses of milk a day, but to turn them into cheese instead!”

—David Asher, author of The Art of Natural Cheesemaking

“Eat Like a Human had me on the edge of my seat from the first paragraph till the very end. In a world of processed food, deceptive marketing, and fad diets, this book is a true guide for living and eating! A powerful read and a wealth of invaluable knowledge from Dr. Bill Schindler.”—Michael Hunter, author of The Hunter Chef

“I’ve been in the food industry for more than forty years and owned a culinary school for twenty-five, and few people have impacted my philosophy of eating as much as Dr. Bill Schindler. With his vast knowledge, he describes our nutritive past as humans. Through his huge charisma, he tells us what paths we can follow for the future, leaving the choice to us."—John Nocita, president, Italian Culinary Institute