The Twelfth Enchantment: A Novel (Paperback) 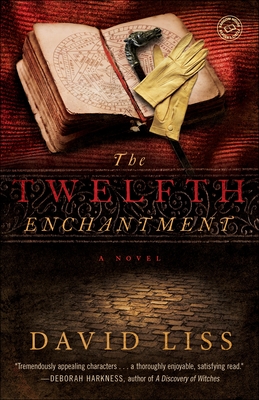 By David Liss
Email or call for price.
Special Order

Lucy Derrick is a young woman of good breeding and poor finances. After the death of her beloved father, she becomes the unwanted boarder of her tyrannical uncle, fending off marriage to a local mill owner. But just as she is resigned to a life of misery, a handsome stranger—the poet and notorious rake Lord Byron—arrives at her house, stricken by what seems to be a curse, and with a cryptic message for Lucy.

With England on the cusp of revolution, Lucy inexplicably finds herself awakened to a world where magic and mortals collide, and the forces of ancient nature and modern progress are at war for the soul of England . . . and the world. The key to victory may be connected to a cryptic volume whose powers of enchantment are unbounded. Now, challenged by ruthless enemies with ancient powers at their command, Lucy must harness newfound mystical skills to preserve humanity’s future. And enthralled by two exceptional men with designs on her heart, she must master her own desires to claim the destiny she deserves.

Look for special features inside. Join the Circle for author chats and more.

David Liss is the author of The Devil’s Company, The Whiskey Rebels, The Ethical Assassin, A Spectacle of Corruption, The Coffee Trader, and A Conspiracy of Paper, winner of the Edgar Award for Best First Novel. He lives in San Antonio with his wife and children.

“A fascinating netherworld weaves through David Liss’s intoxicating new novel, The Twelfth Enchantment. Set in Regency England, it tells the story of Lucy Derrick, a vivacious heroine in the tradition of Jane Austen’s Elizabeth Bennet. It takes a cunning novelist, indeed, to tell a story this gripping—and magical.”—Katherine Howe, author of The Physick Book of Deliverance Dane

“A unique and fascinating story, compelling characters, and the delicious combination of realism and mythical.”—Pittsburgh Historical Fiction Examiner

“A tale of mystery, intrigue, and magic that leaves the reader wanting more.”—Austenprose

“An enthralling tale of romance and the supernatural—with a heroine for the ages.”—Stephanie Barron, author of Jane and the Canterbury Tale