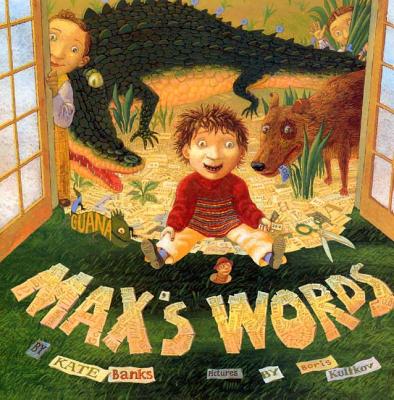 Max's brothers have grand collections that everyone makes a big fuss over. Benjamin collects stamps and Karl collects coins, and neither one will share with their little brother. So Max decides to start a collection of his own. He's going to collect words. He starts with small words that he cuts out of newspapers and magazines, but soon his collection has spilled out into the hall. All the while, his brothers are watching. Benjamin brags that he has one thousand stamps. Karl is just a few coins short of five hundred. But a thousand stamps is really just a bunch of stamps, and a lot of coins is only a heap of money. A pile of words, however, can make a story.

Kate Banks has written many books for children, among them Max’s Words, And If the Moon Could Talk, winner of the Boston Globe–Horn Book Award, and The Night Worker, winner of the Charlotte Zolotow Award. She grew up in Maine, where she and her two sisters and brother spent a lot of time outdoors, and where Banks developed an early love of reading. “I especially liked picture books,” she says, “and the way in which words and illustrations could create a whole new world in which sometimes real and other times magical and unexpected things could happen.” Banks attended Wellesley College and received her master's in history at Columbia University. She lived in Rome for eight years but now lives in the South of France with her husband and two sons, Peter Anton and Maximilian.

Boris Kulikov is the critically acclaimed illustrator of many children's books. His work includes Papa's Mechanical Fish by Candace Fleming; W is for Webster by Tracey Fern; and the Max's Math series, written by Kate Banks.He lives in Brooklyn, New York.

“Brims with wit. Readers and writers alike will enjoy the linguistic fun in this nearly word-perfect book.” —Starred, Publishers Weekly

“Kids are naturally inclined to collect things, and the idea of accumulating something intangible in this delightful homage to storytelling will intrigue them. In a word: captivating.” —Booklist