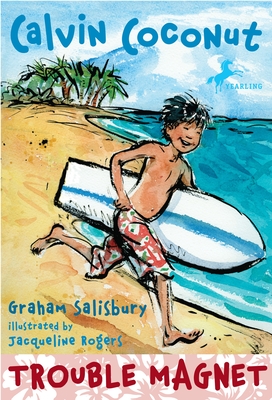 This is book number 1 in the Calvin Coconut series.

A humorous chapter book about a fourth-grade boy, full of the fun of growing up in Hawaii.

Calvin Coconut lives near the beach in Kailua, Hawaii, with his mom and his little sister. All his friends live there, too.


Mom says: "You're the man of the house, Cal." Which means: Be responsible. Calvin tries, but fun—and trouble—follows him wherever he goes, even in the classroom, also known as Mr. Purdy's Fourth-Grade Boot Camp. And how can he be the man of the house after teenage Stella-from-Texas arrives to be the live-in babysitter and steps all over Calvin's turf?


Graham Salisbury is the author of the Calvin Coconut books, as well as many exceptional novels for young readers. Among them are Blue Skin of the Sea, Lord of the Deep, Eyes of the Emperor, House of the Red Fish, Night of the Howling Dogs, and the perennial bestseller Under the Blood-Red Sun.


Graham Salisbury grew up in Hawaii. Calvin Coconut and his friends attend the same school Graham did—Kailua Elementary School. Graham now lives in Portland, Oregon, with his family. You can visit him at www.grahamsalisbury.com.


Jacqueline Rogers has illustrated more than ninety books for young readers over the past twenty years. She studied illustration at the Rhode Island School of Design and lives in upstate New York. You can visit her at www.jacquelinerogers.com.