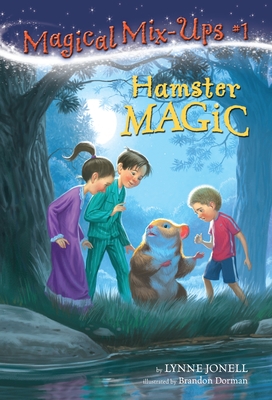 This is book number 1 in the Magical Mix-Ups series.

From Lynne Jonell, the popular author of Emmy and the Incredible Shrinking Rat, comes a high-spirited story of mixed-up magic and wishes gone awry.

Celia Willow is the baby of the family and she's sick of it. She's sick of being younger and smaller. She's sick of never being taken seriously. So when her hamster surprises the Willows with his wish-granting powers, she blurts out her deepest desire. The problem? Celia didn't exactly wish to be furry. Her big brothers and sister can't let her parents see her like this, but they only have one night to fix things. How can Abner, Tate, and Derek reverse something as powerful as hamster magic . . . before breakfast?

Hamster Magic is on the Texas Bluebonnet Masterlist for 2012-2013 and was a finalist for the Minnesota Book Award.

LYNNE JONELL is the author of the popular book Emmy and the Incredible Shrinking Rat, a Booklist Editor's Choice and one of School Library Journal's Best Books of the Year, as well as The Secret of Zoom and seven picture books. Although she doesn't really care for rats, hamsters, or any kind of rodent at all, she still keeps writing about them. Don't ask why. She doesn't understand it herself. Visit her Web site at lynnejonell.com.

BRANDON DORMAN has created hundreds of illustrations for books and magazines, including the cover art for the Newbery Honor Book Savvy.

The Bulletin of the Center for Children’s Books, January 2011:

"Having just moved into an old house in the country, siblings Abner, Tate, Derek, and Celia Willow find a hamster in the basement, whom they stick in their former hamster’s cage and name Hammy. Hammy is no ordinary hamster: not only can he talk, he can grant wishes. Of course, magic’s always a dangerous thing in the hands of the unaccustomed, and little Celia’s wish to be big goes awry, turning her into a gigantic hamster and leaving Hammy all out of magic. The four kids (three kids and one giant hamster, actually), hoping to de-hamsterize Celia, venture out into the night to meet the Great Hamster. It’s an unusual premise, to be sure, but there is something both appealing and remarkably nostalgic in this furry tale of cooperation among siblings and magical animals interacting with the human world. At the core of the slim novel is the relationship of the four siblings; even the Great Hamster commends them on being such supportive “litter-mates.” Fans of animal fiction will revel in Celia’s nighttime antics, as she is unable to stop herself from acting like a hamster, running like mad, performing acrobatics, and gnawing everything in site. Dorman’s black-and-white illustrations, partnering sturdy lines with soft gray shading, provide abundant imagery for the nocturnal adventures, and his girl-turned-hamster has a remarkably endearing expression. This is a sweet, simple narrative that will appeal to fans of Marion Dane Bauer and those who like their animal tales with a touch of magic." HM