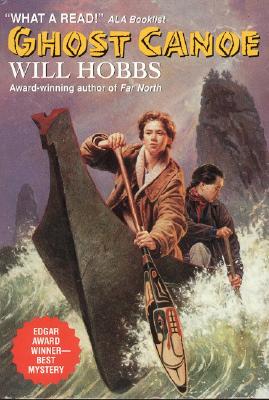 Award-winning author and master of adventure Will Hobbs delivers a breathless mystery that will have readers on the edge of their seats!

After a sailing ship breaks up on the rocks off Washington's storm-tossed Cape Flattery, Nathan McAllister, the fourteen-year-old son of the lighthouse keeper, refuses to believe the authorities, who say there were no survivors. Unexplained footprints on a desolate beach, a theft at the trading post, and glimpses of a wild mystery man convince Nathan that someone is hiding in the remote sea caves along the coast.

With his new friend, Lighthouse George, a fisherman from the famed Makah whaling tribe, Nathan paddles the fierce waters of the Pacific searching for clues. And once alone in the forest, Nathan may have found some: a ghostly canoe and a skeleton that may unlock the mystery of ancient treasure, betrayal . . .and murder.

This thrilling middle grade adventure from Will Hobbs, a former teacher and the author of beloved books such as Far North, was chosen for Georgia's Children's Book Award Masterlist.

Will Hobbs is the award-winning author of nineteen novels, including Far North, Crossing the Wire, and Take Me to the River.

Never Say Die began with the author's eleven-day raft trip in 2003 down the Firth River on the north slope of Canada's Yukon Territory. Ever since, Will has been closely following what scientists and Native hunters are reporting about climate change in the Arctic. When the first grolar bear turned up in the Canadian Arctic, he began to imagine one in a story set on the Firth River.

A graduate of Stanford University, Will lives with his wife, Jean, in Durango, Colorado.