The Legend of Bass Reeves (Hardcover) 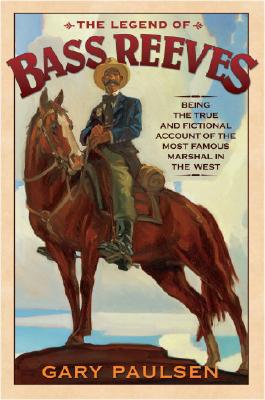 Born into slavery, Bass Reeves became the most successful US Marshal of the Wild West.
Many "heroic lawmen" of the Wild West, familiar to us through television and film, were actually violent scoundrels and outlaws themselves. But of all the sheriffs of the frontier, one man stands out as a true hero: Bass Reeves.

He was the most successful Federal Marshal in the US in his day. True to the mythical code of the West, he never drew his gun first. He brought hundreds of fugitives to justice, was shot at countless times, and never hit.

Bass Reeves was a black man, born into slavery. And though the laws of his country enslaved him and his mother, when he became a free man he served the law, with such courage and honor that he became a legend.

Gary Paulsen is the distinguished author of many critically acclaimed books for young people, His most recent books are "Brian's Hunt," "The Quilt, ""Molly McGinty Has a Really Good Day," and "The Time Hackers." The author lives in New Mexico and the Pacific Ocean.

“Paulsen’s telling is rich in both vivid and gory historical detail, from scalping, branding and burying to hunting, butchering and animal care. Completely captivating–begs to be made into a movie.”–Kirkus Reviews, Starred

“A stirring tale of adventure.”–Booklist, Starred


From the Paperback edition.