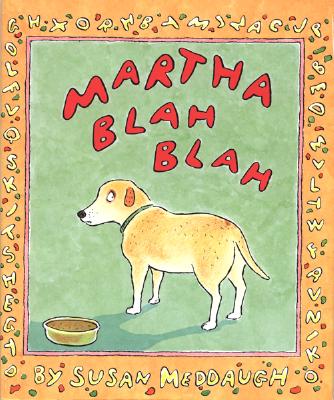 By Susan Meddaugh (Illustrator)
Email or call for price.
Out of Print

Something's wrong with Martha, the talking dog! She has eaten her daily bowl of alphabet soup, but when she opens her mouth to speak, strange sounds come out instead of words. Fortunately her nose still works, and she follows it to the source of the mystery.

Susan Meddaugh was born and raised in Montclair, New Jersey. She graduated from Wheaton College, where she studied French literature and fine arts. After working briefly with an advertising agency in New York, she moved to Boston and worked at a publishing company for ten years, first as a designer, then art editor, and finally as art director. While there, she did the illustrations for Good Stones (Houghton Mifflin) by Anne Epstein, and then decided to strike out on her own as a freelance illustrator and creator of children's books. Since that time, Susan has written and illustrated many popular books for children, including Martha Speaks, which was chosen as a New York Times Best Illustrated Book for 1992. In 1998 she was awarded the New England Book Award, given by the New England Booksellers Association to recognize a body of work. Her work also was acknowledged with a New York Times Best Illustrated Award. She lives in Sherborn, Massachusetts.

"Martha becomes a victim of corporate downsizing in the most inspired book yet about this talking dog. . . . This latest entry is a superb blend of humor, pathos, and Martha's brave panache." Horn Book, Starred