Silver City: A Novel of the American West (A Cash McLendon Novel #3) (Hardcover) 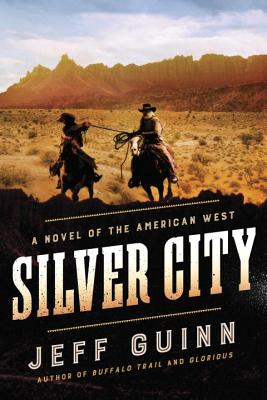 This is book number 3 in the A Cash McLendon Novel series.

Cash McLendon faces off against stone-cold enforcer Killer Boots in a final showdown in this rousing Western adventure from the New York Times bestselling author of Buffalo Trail—winner of the TCU Texas Book Award.

Cash McLendon, reluctant hero of the epic Indian battle at Adobe Walls, has journeyed to Mountain View in the Arizona Territory with one goal: to convince Gabrielle Tirrito that he’s a changed man and win her back from schoolteacher Joe Saint.

As they’re about to depart by stage for their new life in San Francisco, Gabrielle is kidnapped by enforcer Killer Boots, who is working on orders from crooked St. Louis businessman Rupert Douglass. Cash, once married to Douglass’s troubled daughter, fled the city when she died of accidental overdose—and Douglass vowed he’d track Cash down and make him pay.

Now McLendon, accompanied by Joe Saint and Major Mulkins, hits the trail in pursuit of Gabrielle and Killer Boots, hoping to make a trade before it’s too late...

Jeff Guinn is the winner of the 2016 TCU Texas Book Award and the bestselling author of numerous works of fiction and nonfiction, including Silver City, Buffalo Trail, Glorious, Manson, The Last Gunfight, and Go Down Together: The True, Untold Story of Bonnie and Clyde. The former books editor at the Fort Worth Star-Telegram and award-winning investigative journalist, he is a member of the Texas Institute of Letters and the Texas Literary Hall of Fame. Guinn lives in Fort Worth.

“[A] rousing story of revenge....Plenty of action for genre western fans but enough meat for a broader cut of historical-fiction readers.”—Booklist

“Wonderful....This is a Western you have to love, and Killer Boots might be the most unnerving Western bad man since Blue Duck in Larry McMurtry’s Lonesome Dove.”—Roundup Magazine

“This is what Guinn does: Instead of filling his books with the mythology of the Old West, much of which has no basis in fact, he goes for authenticity and reveals what life in those times really was like.”—Fort Worth Star-Telegram

“In previous works, Fort Worth novelist Jeff Guinn has shown a keen eye for detail and historical accuracy. They serve him well again in Silver City…skillfully raises the stakes for his main characters....Silver City caps off an engrossing Old West trilogy well worth reading.”—Dallas Morning News

“Guinn gives readers a good chase up and through the Arizona desert, an exciting fight with a young Geronimo and his men, and a scrappy new heroine with a definite mind of her own.”—Quad City Times

“Will keep you turning the pages....[Guinn] really knows how to keep a reader zoned in.”—Abilene Reporter-News

“This latest entry did not disappoint. The steady unraveling of the plot is genuinely exciting. Killer Boots is a devious killer, and when Cash convinces Gabrielle to move to California with him, their whole world spins out of control...I highly recommend this book and the series as a whole.”—Historical Novels Review

“Perfect for fans of John Wayne and Zane Grey...A worthy read for any fan of the Old West. Lively characters, authentic Old West settings, and great storytelling highlight this tale...Silver City is a rousing Western adventure, and one this ol' cowboy fan found very satisfying.”—The Oklahoman

“[Guinn] knows how to dig into the past...an absorbing, informative and entertaining tale of life, love, hope and ambition in the American West.”—Dallas Morning News

“A worthy addition to the western genre....Catnip for Lonesome Dove fans”—The Seattle Times

“Will delight historical fiction fans longing for the return of classic Westerns. This entertaining outing is sure to keep the saloon doors swinging for more entries in the genre.”—Library Journal

“Full of historical notable figures from the Old West, this second volume in Guinn’s trilogy not only provides a buoyant narrative but also several lessons in Western history.”—Library Journal

“A trip to Glorious, Arizona, in Jeff Guinn’s new western novel is like a cool draft beer after a long, hot day on a dusty trail.”—New York Times bestselling author C. J. Box

“If, like me, you’ve been waiting for the next Louis L’Amour or Zane Grey, the good news is his name is Jeff Guinn.”—Craig Johnson, New York Times bestselling author of the Walt Longmire mysteries, the basis of A&E’s hit series Longmire