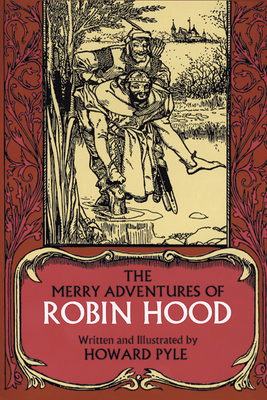 No archer ever lived that could speed a gray goose shaft with such skill and cunning as his, nor were there ever such yeomen as the sevenscore merry men that roamed with him through the greenwood shades. Right merrily they dwelt within the depths of Sherwood Forest, suffering neither care nor want, but passing the time in merry games of archery or bouts of cudgel play, living upon the King's venison, washed down with draughts of ale of October brewing.
Not only Robin himself but all the band were outlaws and dwelt apart from other men, yet they were beloved by the country people round about, for no one ever came to Jolly Robin for help in time of need and went away again with an empty fist.
Pyle takes the reader along with Robin Hood and his band on their merry adventures. They tell of Little John, Will Scarlet, and Allan a Dale, and how they came to join the band; how Robin Hood escaped the arrows of the grim Sheriff of Nottingham, and later revenged himself; what happened at the court of the gentle Queen Eleanor. The tales go on to tell of Little John as a barefoot friar, and Robin Hood as a beggar; the chase by the quick-tempered Henry II; a visit from the good King Richard of the Lion's Heart; and all the other exploits of Robin Hood and his band.
This is the best version of the classic stories and the only edition that reproduces both the original (1883) Pyle text and the famous Pyle illustrations in their entirety, including the page decorations. A favorite for generations, it will be welcomed again by parents and children alike in this sturdy paperback edition.

The stories and drawings of Howard Pyle (1853-1911) epitomize the golden age of American illustration. A priceless contribution to American children's literature, Pyle's work set a standard of excellence, with tales and images remarkable for their engaging simplicity and penetrating realism.