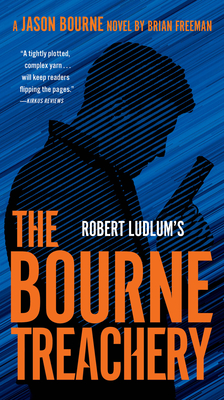 This is book number 16 in the Jason Bourne series.

The world's most ruthlessly efficient assasin, Jason Bourne, has carved a bloody swathe through all his opponents but now he's facing the one force he can't defeat--his own past--in the latest thrilling entry in Robert Ludlum's New York Times bestselling series.

Three years ago, Jason Bourne embarked on a mission in Estonia with his partner and lover, a fiery Treadstone agent code-named Nova. Their job was to rescue a Russian double agent who’d been smuggled out of St. Petersburg in the midst of an FSB manhunt.

They failed. The Russian died at the hands of a shadowy assassin known only by the nickname Lennon.

Now everything has changed for Bourne. Nova is gone, killed in a mass shooting in Las Vegas. Bourne is a lone operative, working in the shadows for Treadstone, when he’s called in for a new mission in London—to prevent another assassination masterminded by Lennon.

But nothing about this mission is what it seems. As Bourne engages in a cat-and-mouse game with Lennon across the British countryside, he discovers that everything he thought he knew about the past was a lie. And with the body count rising, he comes to an inevitable conclusion: Some secrets should stay buried.

Brian Freeman is the bestselling author of more than twenty novels, including the Jonathan Stride and Frost Easton series and the New York Times bestseller, The Deep, Deep Snow. His novel, Spilled Blood, won the award for Best Hardcover Novel in the International Thriller Writers Awards, and his novel, The Burying Place, was a finalist for the same award. His debut novel, Immoral, won the Macavity Award and was a finalist for the Dagger, Edgar, Anthony, and Barry Awards for Best First Novel. Freeman lives in Minnesota with his wife.

Robert Ludlum was the author of twenty-seven novels, each one a New York Times bestseller. There are more than 225 million of his books in print, and they have been translated into thirty-two languages. He was the author of The Scarlatti Inheritance, The Chancellor Manuscript, and the Jason Bourne series--The Bourne Identity, The Bourne Supremacy, and The Bourne Ultimatum--among other novels. Ludlum passed away in March 2001.