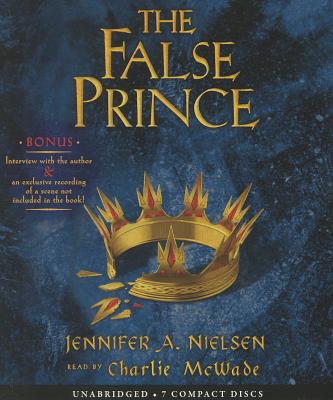 New York Times bestseller The False Prince thrills with wild twists and turns, danger and deceit, and the revelation of hidden identities that will have readers rushing breathlessly to the end.
In a discontented kingdom, civil war is brewing. To unify the divided people, Conner, a nobleman of the court, devises a cunning plan to find an impersonator of the king's long-lost son and install him as a puppet prince. Four orphans are recruited to compete for the role, including a defiant boy named Sage. Sage knows that Conner's motives are more than questionable, yet his life balances on a sword's point -- he must be chosen to play the prince or he will certainly be killed. But Sage's rivals have their own agendas as well.

As Sage moves from a rundown orphanage to Conner's sumptuous palace, layer upon layer of treachery and deceit unfold, until finally, a truth is revealed that, in the end, may very well prove more dangerous than all of the lies taken together.

An extraordinary adventure filled with danger and action, lies and deadly truths that will have readers clinging to the edge of their seats.

And don't miss the highly anticipated fourth book in the series, The Captive Kingdom, coming October 2020!

Praise for The False Prince

"Sage proves to be a compelling character whose sharp mind and shrewd self-possession will make readers eager to follow him into a sequel." -The Wall Street Journal

"[A] terrific story that carries readers along to the very (surprising) end and will leave them clamoring for the next book in her trilogy." -BookPage, featured "Top Pick" review

"[M]ore Harry Potter (minus the magic) than Hunger Games... with authentic characters, a convincing sense of danger and a genuinely high-stakes plot." -The Hollywood Reporter

"[A] surefire mix of adventure, mystery, and suspense." -Horn Book