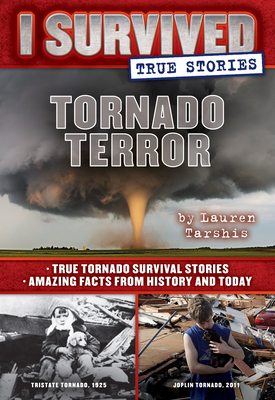 This is book number 3 in the I Survived True Stories series.

From the author of the New York Times bestselling I Survived series, comes two gripping accounts of two young people who survived two terrifying twisters.
The Tri-State Tornado of 1925 was the deadliest tornado strike in American history, tearing through three states and killing 700 people. Almost a century later, the Joplin Tornado was a mile-wide monster that nearly destroyed the
heart of a vibrant city. The author of the New York Times best-selling I Survived series now brings you the vivid and true stories of two young people who survived these terrifying twisters, along with fascinating facts about
tornadoes and profiles of the well-respected scientists and storm chasers who study them.

Lauren Tarshis's New York Times bestselling I Survived series tells stories of young people and their resilience and strength in the midst of unimaginable disasters. Lauren has brought her signature warmth and exhaustive research to topics such as the September 11 attacks, the destruction of Pompeii, Hurricane Katrina, and the bombing of Pearl Harbor, among others. She lives in Connecticut with her family, and can be found online at laurentarshis.com.

"The narratives are factual yet still lively and suspenseful enough to hook readers. Ideal for a high-interest pick or a read-aloud for older students." -- School Library Journal

"This high-interest addition to an already beloved series is a no-brainer for elementary school libraries." -- School Library Journal