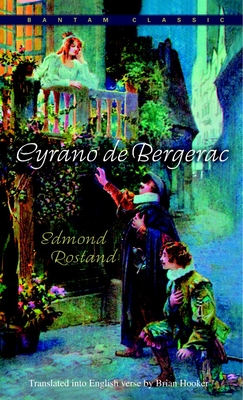 This is Edmond Rostand's immortal play in which chivalry and wit, bravery and love are forever captured in the timeless spirit of romance. Set in Louis XIII’s reign, it is the moving and exciting drama of one of the finest swordsmen in France, gallant soldier, brilliant wit, tragic poet-lover with the face of a clown. Rostand’s extraordinary lyric powers gave birth to a universal hero—Cyrano De Bergerac—and ensured his own reputation as author of one of the best-loved plays in the literature of the stage.

This translation, by the American poet Brian Hooker, is nearly as famous as the original play itself, and is generally considered to be one of the finest English verse translations ever written.

Edmond Rostand was born in Marseilles in 1868 and died in 1918. His thirty-year literary career is marked primarily by one astronomical success and a number of plays of lesser note. Early on, Edmond displayed an interest in marionette theater and poetry. While attending the College Stanislas in Paris, Rostand studied French literature, history, and philosophy. He followed his own inclination and deviated from the course his father had designed for him as a lawyer, although he did finally earn a legal degree and gain admission to the bar. His first poetry appeared in the small academy review Mireille. In 1888, his LeGantRouge was produced and, in 1890, Rostand published his first book of poetry, LesMusardises. His play LesRomanesques was produced in 1894, followed a year later by LaPrincessLointaine. The playwright's name and influence spread. Rostand's fame peaked in 1898 with the first production of CyranodeBergerac, a five-act verse drama. The play was important to the drama of its time for its romantic nature, a departure from the realistic conventions then in vogue. It was an enormous success. After his next success, L'Aiglon (1900), ten years followed before Rostand completed another play. He spent the remaining years of his life in semiretirement, and died in 1918.?