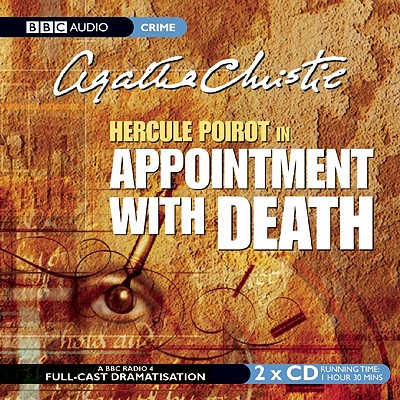 This is book number 1938 in the Hercule Poirot Radio Dramas series.

"You do see, don't you, that she's got to be killed? It's the only solution."
Even when on holiday in Jerusalem the so-called City of Peace Hercule Poirot can't seem to escape the strains of death and murder. His first evening at the King Solomon Hotel finds the above phrase floating into his room from outside. What does it mean? Who is the speaker, and just how seriously should it be considered? While Poirot struggles to resist the lure of a fresh mystery, he cannot suppress the foreboding in his heart. Also in residence at the hotel are the Boyntons, a nervous American family held tightly in the grip of their matriarch. Then there is the young medic Sarah King, plus Dr. Theodore Gerard, an expert in the subject of schizophrenia. These and other guests are thrown together on an organized trip to the ancient city of Petra. Whilst love apparently blossoms for Miss King, death visits another member of the party. It is clearly murder, and there are a number of likely suspects. Only one man has the skill to distinguish between them: Hercule Poirot. Agatha Christie's exotic mystery is dramatized with a full cast including Jill Balcon and Miriam Karlin.

Agatha Christie was born in 1890. During the World War I she worked as a hospital dispenser, where she gleaned the working knowledge of various poisons. Her first novel was The Mysterious Affair at Styles, published in 1920, followed over the next six years by four more detective novels and a short story collection. However, it was not until the publication of The Murder of Roger Ackroyd that Agatha Christie s reputation was firmly established. In 1930 the sharp-witted spinster sleuth Miss Marple made her first appearance in Murder at the Vicarage. In all, Agatha Christie published 80 crime novels and short story collections. As her play The Mousetrap (the longest-running play in the history of the theater) testifies, Agatha Christie s detective stories are likely to appeal for a long time to come. Agatha Christie was awarded a CBE in 1956 and was made a Dame of the British Empire in 1971. She died in 1976."