Martita, I Remember You/Martita, te recuerdo: A Story in English and Spanish (Paperback) 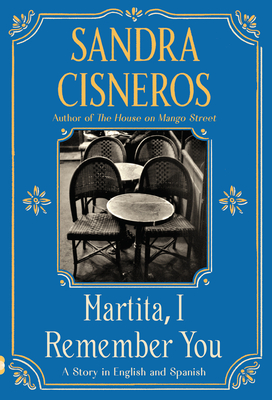 The celebrated bestselling author of The House on Mango Street “is back with her first work of fiction in almost a decade, a story of memory and friendship [and] the experiences young women endure as immigrants worldwide” (AP). In this masterfully written dual-language edition, a long-forgotten letter sets off a charged encounter with the past.

As a young woman, Corina leaves her Mexican family in Chicago to pursue her dream of becoming a writer in the cafés of Paris. Instead, she spends her brief time in the City of Light running out of money and lining up with other immigrants to call home from a broken pay phone. But the months of befriending panhandling artists in the métro, sleeping on crowded floors, and dancing the tango at underground parties are given a lasting glow by her intense friendships with Martita and Paola. Over the years the three women disperse to three continents, falling out of touch and out of mind—until a rediscovered letter brings Corina’s days in Paris back with breathtaking immediacy.

Martita, I Remember You is a rare bottle from Sandra Cisneros’s own special reserve, preserving the smoke and the sparkle of an exceptional year. Told with intimacy and searing tenderness, this tribute to the life-changing power of youthful friendship is Cisneros at her vintage best, in a beautiful
dual-language edition.

Poet, short story writer, novelist, essayist and artist, SANDRA CISNEROS is the author of Bad Boys, My Wicked Wicked Ways, Loose Woman, Woman Hollering Creek and Other Stories, The House on Mango Street, Caramelo, Have You Seen Marie?, Vintage Cisneros—a compilation of her works— and Bravo, Bruno. Her most recent books are A House of My Own: Stories from My Life, which is illustrated with photographs, and Puro Amor in a dual-language edition translated by Liliana Valenzuela and featuring illustrations by the author. Born in Chicago in 1954, she is a citizen of both the United States and Mexico. She makes her living by her pen.

ONE OF THE BEST BOOKS OF THE YEAR: NPR, The Smithsonian

"Genre-defying. . . . it is difficult to think of a more fitting story for today."
–Houston Chronicle

“To read this novella is to stumble upon gems. Cisneros’s prose hums, filled with personification, metaphor, and allusion, crisscrossing from Paris to Chicago to Mexico. Her writing spans languages, continents, and time. . . . Martita, I Remember You is a love letter to female friendship.”
–Los Angeles Review of Books

"The House on Mango Street was THE book of my teenage years. . . . Martita, I Remember You/Martita Te Recuerdo feels like a continuation of that magic."
--Literary Hub

“[Cisneros] is more than a member of the literary pantheon. She’s also part guru, part patron saint of Hispanic literature. . . and a total truth-teller.”
–Texas Monthly

“A story of memory and friendship, but also about the experiences young women endure as immigrants worldwide."
–AP

"[Sandra Cisneros] is an evolving artist who persistently adds substantial titles to her impressive oeuvre of poetry, short stories, essays and memoirs. With Martita, I Remember You Cisneros captures a broad range of influences and important aspects of her life. She grounds the story in a Chicago setting that harkens to her own roots in the city while placing events in a less-than-fanciful Paris she knew as a young traveler. The perspective is both wise and naïve, pragmatic and hopeful. In the story, Cisneros captures the meaning and residual power of a transformative youthful experience. Martita’s narrator, Corina, and Cisneros herself, take the long view to dissect the ways in which our past becomes part of the fabric of our most contemporary selves."
—New City Lit

"Sandra Cisneros’s exquisite jewel of a novella Martita, I Remember You is about aloneness and togetherness, about hopes and separations, about choices, bad and good and indifferent. It’s about youth and memory, about looking into the unknown future and back into the unfathomable past."
—Third Coast Review

"Best-selling Chicana author Sandra Cisneros is back with a brand-new gem. . . . A lovely pick for those who love reading about friendships."
—Reader’s Digest

"Martita, I Remember You/Martita, te recuerdo is written in English and Spanish, the two versions existing in the same book. The language is poetic. Sandra Cisneros is known for her bestselling novel The House on Mango Street, and while this is a shorter story, the magic and power of her writing is ever present."
—Alma

"The legendary Sandra Cisneros returns with the dual-language novel Martita, I Remember You. The story follows Corina, who, after rediscovering an old letter, finds herself revisiting the heady, heated summer she spent with Martita and Paola in Paris."
—Bustle

"Tightly written, unfolding in a controlled spool of memory, the story is told in a combination of correspondence and narrative vignettes; its length is closer to that of a long short story but it works as a stand-alone volume, especially as paired with its Spanish version. A tale both beautiful and brief."
—Kirkus Reviews (starred review)

"Every heart-revving scene is sensuously and incisively rendered, cohering into a vivid, tender, funny, bittersweet, and haunting episodic tale of peril, courage, concession, selfhood, and friendship. Cisneros's intricately multidimensional and beautifully enveloping novella is presented in both English and Spanish."
—Booklist (starred review)

"Cisneros’s language and rhythm of her prose reverberate with Corina’s longing for her youth and unfulfilled promise. The author’s fans will treasure this."
—Publishers Weekly