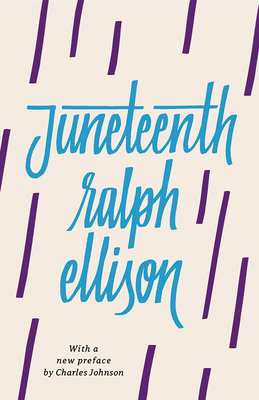 “Ellison sought no less than to create a Book of Blackness, a literary composition of the tradition at its most sublime and fundamental." —Henry Louis Gates, Jr., TIME

From the renowned author of the classic novel Invisible Man, Ralph Ellison’s Juneteenth is brilliantly crafted, moving, and wise. With a new introduction by National Book Award-winning author and scholar Charles R. Johnson.

Here is Ellison, the master of American vernacular—the preacher’s hyperbole and the politician’s rhetoric, the rhythms of jazz and gospel and ordinary speech—at the height of his powers, telling a powerful, evocative tale of a prodigal of the twentieth century.

“Tell me what happened while there’s still time,” demands the dying senator Adam Sunraider to the Reverend A. Z. Hickman, the itinerant Negro preacher whom he calls Daddy Hickman. As a young man, Sunraider was Bliss, an orphan taken in by Hickman and raised to be a preacher like himself. His history encompasses camp meetings where he became the risen Lazarus to inspire the faithful; the more ordinary joys of Southern boyhood; bucolic days as a filmmaker; lovemaking with a young woman in a field in the Oklahoma sun. And behind it all lies a mystery: how did this chosen child become the man who would deny everything to achieve his goals?

Ralph Ellison was born in Oklahoma City in 1914. He is the author of the novel Invisible Man (1952), winner of the National Book Award and one of the most important and influential American novels of the twentieth century, as well as numerous essays and short stories. He died in New York City in 1994.

Charles Johnson is the S. Wilson and Grace M. Pollock Emeritus Professor of English at the University of Washington. A MacArthur fellow, he is the author of twenty-five books, among them the novel Middle Passage, which received the 1990 National Book Award for fiction

[A] vastly ambitious informing allegory, an allegory made rich, as in Invisible Man, with the sensory details of which Ellison was such a master."  -The New York Review of Books

"[A] stunning achievement. . . . Juneteenth is a tour de force of untutored eloquence.  Ellison sought no less than to create a Book of Blackness, a literary composition of the tradition at its most sublime and fundamental."  -Henry Louis Gates, Jr., Time

"Juneteenth . . . threatens to come as close as any since Huckleberry Finn to grabbing the ring of the Great American Novel."  -Los Angeles Times

“Eloquent, ardent, and worth the wait. . . . Beautifully written and imaginatively conceived, Juneteenth, like Invisible Man, deserves to be read and reread by generations.” —The Atlanta Journal-Constitution