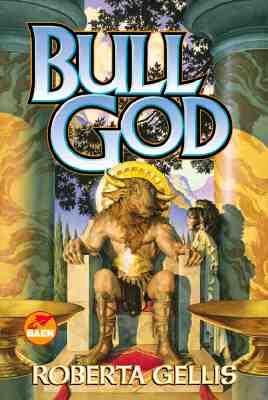 MOMMA DOESN'T TALK ABOUT THAT PARTY...

When gods still walked the Earth, a king could pray for a sign and have a white bull rise from the sea to confirm his claim to the throne. But a god's price was high, and when Minos did not keep his promise to the god Poseidon, the god meddled with Minos' wife...and the Minotaur, a child with the head of a bull, was born. The question is, did Poseidon intend his son to be worshiped as a new god, or is he the god's curse on Knossos, a monster that will destroy it?

Ariadne was the Minotaur's half-sister, the only one who would touch him and care for him when he was born. She was also high priestess of Dionysus, sworn to interpret his Visions, but one Vision destroys her peace. Dionysus Sees that the bull-head must die or bring disaster upon the realm. Can Ariadne agree to the slaughter of the deformed half-brother who clings to her as the only one who cares for him? Can she protect the Minotaur in defiance of Dionysus' vision and dare the god's wrath? Should she?