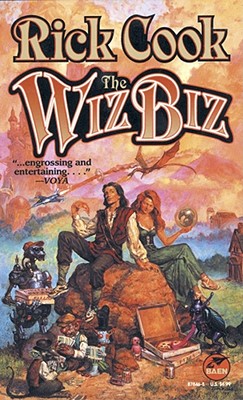 It all began when the wizards of the White League were under attack by their opponents of the Black League and one of their most powerful members cast a spell to bring forth a mighty wizard to aid their cause. What the spell delivered was master hacker Walter Wiz Zumwalt. The wizard who east the spell was dead and nobody -- not the elves, not the dwarves, not even the dragons -- could figure out what the shanghaied computer nerd was good for.But spells are a lot like computer programs, and, in spite of the Wiz's unprepossessing appearance, he was going to defeat the all-powerful Black League, win the love of a beautiful red-haired witch, and prove that when it comes to spells and sorcery, nobody but nobody can beat a Silicon Valley computer geek.