Marvin Redpost #2: Why Pick on Me? (Paperback) 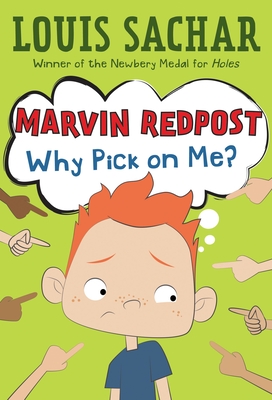 This is book number 2 in the Marvin Redpost series.

There’s a rumor at school that Marvin Redpost picks his nose. Clarence started it, and now everyone believes it. Even Marvin’s friends are embarrassed to be seen with him! Can Marvin figure out how to change everyone’s mind? Or is he doomed to be teased forever?

Hilarious and relatable, Marvin Redpost is perfect for kids who love to bond with quirky characters like Junie B. Jones  and George Brown, Class Clown.

Louis Sachar conducted his own “class survey” in order to find the best title for this book. He told the students in the classrooms he visited that he wanted the title to end with a question mark and have the word “pick” in it. Of all the titles that were suggested, Louis chose Why Pick on Me? Louis is also the bestselling author of the award-winning novel Holes, as well as Small Steps, The Cardturner, Stanley Yelnats’ Survival Guide to Camp Green Lake, There’s a Boy in the Girls’ Bathroom, The Boy Who Lost His Face, Dogs Don’t Tell Jokes, Fuzzy Mud, and the rest of the Marvin Redpost series, among many others. Visit him at louissachar.com.

"It will be an underground classic, an easy reader that kids are dying to read."--(starred) Bulletin, Center for Children's Books.