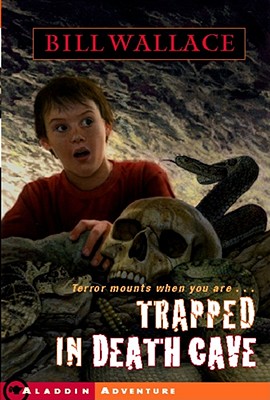 A CURSED TREASURE!
Everybody thinks Gary's grampa died in a fishing accident. But from a note Grampa left, Gary suspects he was murdered. The note tells of a million dollars in gold hidden in a cave and an old Indian curse promising that anyone who touches it will die! Gary and his friend Brian are sure that if they find the gold, they will also find Grampa's killer.
But treasure hunting can be deadly. Now they are stuck in a dark cavern full of tangled skeletons, restless Indian spirits, and a murderer out for their blood! Will Brian and Gary ever get out of Death Cave alive?

Bill Wallace grew up in Oklahoma. Along with riding their horses, he and his friends enjoyed campouts and fishing trips. Toasting marshmallows, telling ghost stories to scare one another, and catching fish was always fun.
One of the most memorable trips took place on the far side of Lake Lawtonka, at the base of Mt. Scott. He and his best friend, Gary, spent the day shooting shad with bow and arrows, cutting bank poles, and getting ready to go when their dads got home from work.
Although there was no "monster" in Lake Lawtonka, one night there was a "sneak attack" by a rather large catfish tail. Checking the bank poles was not nearly as fun or "free" after that point, but it was the inspiration for this story.
Bill Wallace has won nineteen children's state awards and been awarded the Arrell Gibson Lifetime Achievement Award for Children's Literature from the Oklahoma Center for the Book.