Luckenbach Texas The Center of the Universe (Hardcover) 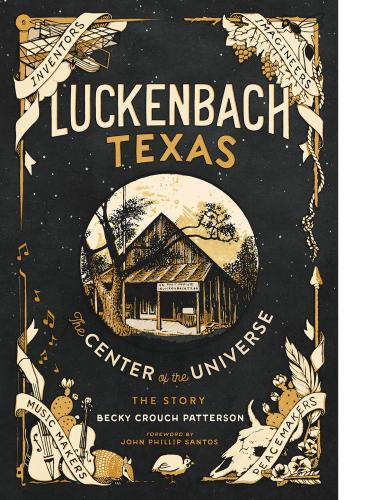 LUCKENBACH TEXAS – CENTER OF THE UNIVERSE covers in colorful detail the years Becky Patterson’s father Hondo Crouch owned the town in the ‘70s, as well as its German-Texas history of intellectual creativity and Civil Wartime tragedy of the 1850s. Luckenbach, located in the heart of the Texas Hill Country, was first established in 1849 by the German “Freethinker” immigrants. It consisted of twelve acres on Grape Creek, with one main building – the post office/general store/bar, a dance hall, blacksmith shop, cotton gin, egg house and two outhouses.

Hondo Crouch bought the town in 1970 and “reinvented” it, calling himself an “Imagineer”, where he staged many zany happenings – like Women’s Only Chili Bust, Return of the Mud Dauber, and Great World’s Fairs. Known as the “Clown Prince” and Mayor of Luckenbach, population 3, he held “pickers circles” for musicians.

In 1973 his friend Jerry Jeff Walker came and lit the fire of outlaw music by recording ¡Viva Terlingua! and two other albums in the primitive setting. Willie Nelson held five Fourth of July Picnics in the field. Hondo was the inspiration for the hit song “Let’s Go to Luckenbach, Texas – Back to the Basics.” The humble venue is still a shrine for Texas music.

Becky Crouch Patterson a fifth generation Texan, was raised on her parents’ ranch not far from Luckenbach. She lives on the 130-year-old Stieler Home Ranch headquarters in Comfort, Texas. Pride in her Hill Country led her to write two previous Texana best-sellers, Hondo, My Father and The Ranch That Was Us. Whether writing, painting, designing hats, boots, clothing, or making tapestries or furnishings for churches, her style always pays homage to her Texas roots, history and lifestyle. Becky’s lyrical writing about her legendary folk hero father Hondo Crouch and his Brigadoon town shows that the free thought of the 1850 German Texas “Freethinkers” was not extinguished. Spellbinding are the tragic stories of the Civil War. Vividly engaging are Luckenbach’s pioneer history, and Texas-German culture. Hysterical and creative are the details of Hondo’s imagination and irrepressible humor we need to cope in our man made world. And how Luckenbach – with the help of Willie, Waylon and a handful of Hondo’s poet songwriter friends – was the scene that gave rise to Texas “Outlaw” music of the 70s. Luckenbach, the biggest little town in Texas, that somehow managed to rock the world. “As a writer, Becky is a chip off one of her father Hondo’s whittlings. She has his same eagle-eye observations, as well as a poetic voice of truth and clarity.” – Willie Nelson

Like everybody else, I loved Hondo and remember him reciting “Luckenbach Moon”. I wish everybody could’ve heard him do that. I was lucky. I did.
- Willie Nelson

Singing “London Homesick Blues” for the first time at Luckenbach during the recording of “Viva Terlingua” was the highlight of my career. – Gary P. Nunn

Drive to Luckenbach. Step into another time. I can’t think of another place like it. – Jerry Jeff Walker

Luckenbach is still a small unpretentious place, but it’s big in my mind’s eye because of what happened there. – Freddy Krc, Gonzo Compadres Band

You don’t have to worry about going over in Luckenbach. The people there have perfected hanging out. It’s more like a theatre. It has a deep sense of integrity about it. – Ray Wylie Hubbard

Hondo was the Sunday Mayor of Luckenbach and the Grand Imagineer. He was so easy to remember, like some song you can’t unlearn. – Charles John Quarto

I went to Luckenbach to get ‘Back to the Basics’. – Miranda Lambert

I like what Hondo said about himself: that he was a “legend in his own mind.” Hondo Crouch is definitely a Texas Legend, in the minds of countless admirers.
- James A. Michener