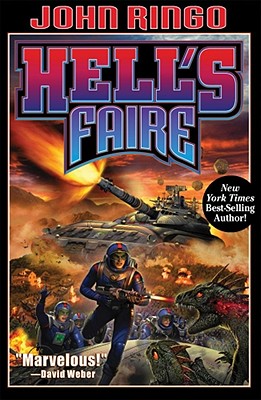 With the defenses of the Southern Appalachians sundered, the only thing standing between the ravening Posleen hordes and the soft interior of the Cumberland Plateau are the veterans of 555th Mobile Infantry. Dropped into Rabun Pass, with a couple of million Posleen behind them and fourteen million to the front, the only question is which will run out first: power, bullets or bodies. But they have a hole card: far to the north the shattered SheVa Nine is undergoing a facelift. Rising from its smoking ashes is a new weapon of war, armed with the most advanced weaponry Terra has ever produced, capable of facing both the Posleen hordes and their redoubtable space-cruisers. Capable of dealing out hell as only SheVa Nine can. If Mike O'Neal and the other members of the 555th are going to survive, it will come down to how much Posleen butt Bun-bun can kick. Prepare to eat antimatter, Posleen-boy.