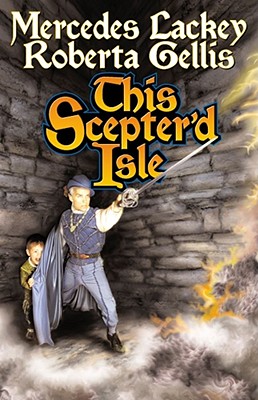 God Save the Queen! (With the help of the Sidhe of Elfland . . .) Two Masters of Historical Fantasy Join Forces in a New Epic-First Time in Paperback!

The FarSeers among the Sidhe of Elfhame Avalon have seen two visions of the future. In one, an evil queen will take the throne and welcome the Inquisition in, debauching the nation and threatening even the elf strongholds throughout the land. In another, a red-haired child will grow up to take the throne and usher in a golden age of literature, music, and art. The evil Unseleighe Sidhe, who draw power from pain and misery, welcome the coming of a ruler of humans who will increase their strength, and are determined to prevent the red-haired child from coming to the throne. Unless the good Sidhe can find the child and protect her from the evils and dangers of both the human and elven worlds, she will never grow up to become Elizabeth, Queen of England in the Sixteenth Century.

Mercedes Lackey is the author of the Bardic Voices series and the SERRAted Edge series (both Baen), the Heralds of Valdemar series (DAW), and many more. Of her writing, Stephen King has stated, "She'll keep you up long past your bedtime," and Locus raved, "Lackey is one of the best storytellers in the field." She has her own fan club with over 1,000 members, and was one of the first writers to have an online newsgroup devoted to her writing. Among her popular Baen titles are The Fire Rose, The Lark and the Wren, and The Shadow of the Lion (with Eric Flint and Dave Freer). She lives in Oklahoma.

Roberta Gellis is author of over 25 novels in different fields. New York Times best-selling author John Jakes has called her "a superb storyteller of extraordinary talent," Publishers Weekly has termed her "a master of the medieval historical," and Romantic Times has praised her as "a master spinner of tales." Her many awards include: The Silver and Gold Medal Porgy for historical novels from West Coast Review of Books and the Golden Certificate and Golden Pen from Affaire de Coeur. From Romantic Times she has received both the Award for Best Novel in the Medieval Period and also the Lifetime Achievement Award for Historical Fantasy. And the Romance Writers of America have presented her with their Lifetime Achievement Award. Her previous fantasy titles for Baen are Bull God and Thrice Bound.