Forge of the Titans (Mass Market) 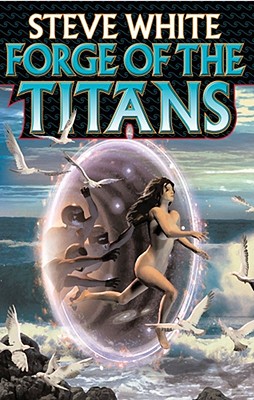 Long Ago the Gods Left Earth, but Now They are Returning-and Some of Them are Not at All Friendly. Space Adventure by the Co-Author of the New York Times Bestseller The Shiva Option.

When Derek Secrest was suddenly pulled out of the Naval Academy to take part in a top secret government project involving telepathy-because tests showed that he had a strong latent talent for psi powers-he thought things couldn't get more weird. He was wrong. Soon he was contacted by a mysterious woman who could open portals at will through spacetime. Her powers seemed godlike, and they were. Millennia ago, extra-dimensional beings with great powers had come to earth and taken on human form, to be later remembered in legends as gods and goddesses-and titans, the ancient enemies of the gods. The godlike beings had driven off the titans, but now they are returning, with a new plan to use humans with psionic abilities to rule the Earth, and not be driven from it this time. And the titans always did have a fondness for human sacrifice and other anti-social activities. Unless Derek and a handful of other telepaths can join forces with the ancient gods to defeat the titans, the world will be plunged into a new dark age of terror and death. But, judging from mythology, just how much can you really trust a god. . . ?

Steve White completed a tour of duty in Vietnam as a Naval officer. His SF adventure trilogy for Baen comprising The Disinherited, Legacy, and Debt of Ages was highly successful, as was Prince of Sunset, and its sequel Emperor of Dawn. With David Weber, he has collaborated on Insurrection, Crusade, In Death Ground, and The Shiva Option.