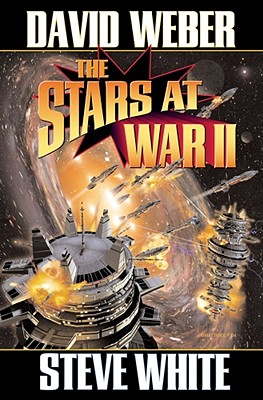 Super-Size Your Science Fiction Adventure Sales Two Complete Novels, One a New York Times Best Seller, in One Huge Volume, Co-Authored by the Creator of Honor Harrington. Contains Insurrection and The Shiva Option. The war wasn't going well. The alien Arachnids were an enemy whose like no civilized race had ever confronted. Like some carnivorous cancer, the Bugs had overrun planet after planet . . . and they regarded any competing sentient species as only one more protein source. Defeat was not an option. . . . The Grand Alliance of Humans, Orions, Ophiuchi, and Gorm, united in desperate self-defense, have been driven to the wall. Billions of their civilians have been slaughtered. Their most powerful offensive operation has ended in shattering defeat and the deaths of their most experienced military commanders. Whatever they do, the Bugs just keep coming. But the warriors of the Grand Alliance know what stands behind them and they will surrender no more civilians to the oncoming juggernaut. They will die first-and they will also reactivate General Directive 18, however horrible it may be. Because when the only possible outcomes are victory or racial extermination, only one option is acceptable. The Shiva Option.And peace isn't always wonderful Once the enemy is defeated, the central governments of the Inner Worlds were anything but willing to relinguish their wartime powers. To insure that their grip on the reins of power remained firm, the bureaucrats are allowing the non-human beings of the Khanate in, while keeping the Fringe Worlds out, smugly confident that this will keep the colonial upstarts in their place. The Fringers have only one answer to that: Insurrection.