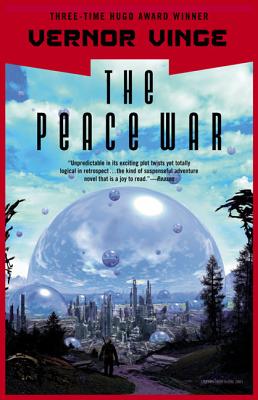 This is book number 1 in the Peace War series.

The Peace War is quintessential hard-science adventure. The Peace Authority conquered the world with a weapon that never should have been a weapon--the "bobble," a spherical force-field impenetrable by any force known to mankind. Encasing governmental installations and military bases in bobbles, the Authority becomes virtually omnipotent. But they've never caught Paul Hoehler, the maverick who invented the technology, and who has been working quietly for decades to develop a way to defeat the Authority. With the help of an underground network of determined, independent scientists and a teenager who may be the apprentice genius he's needed for so long, he will shake the world, in the fast-paced hard-science thriller that garnered Vinge the first of his four Hugo nominations for best novel.

Vernor Vinge is the multi Hugo Award-winning author of A Fire Upon the Deep, A Deepness in the Sky, and Rainbow’s End. Known for his rigorous hard-science approach to his science fiction, he became an iconic figure among cybernetic scientists with the publication in 1981 of his novella "True Names," which is considered a seminal, visionary work of Internet fiction. His many books also include Marooned in Realtime and The Peace War.

Born in Waukesha, Wisconsin and raised in Central Michigan, Vinge is the son of geographers. Fascinated by science and particularly computers from an early age, he has a Ph.D. in computer science, and taught mathematics and computer science at San Diego State University for thirty years. He has gained a great deal of attention both here and abroad for his theory of the coming machine intelligence Singularity. Sought widely as a speaker to both business and scientific groups, he lives in San Diego, California.