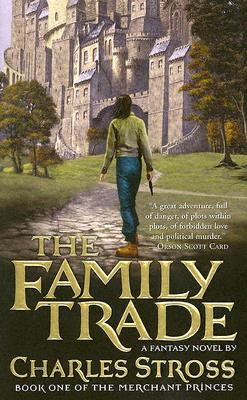 This is book number 1 in the Merchant Princes series.

A bold fantasy in the tradition of Roger Zelazny's Chronicles of Amber, The Merchant Princes is a sweeping new series from the hottest new writer in science fiction

Miriam Beckstein is happy in her life. She's a successful reporter for a hi-tech magazine in Boston, making good money doing what she loves. When her researcher brings her iron-clad evidence of a money-laundering scheme, Miriam thinks she's found the story of the year. But when she takes it to her editor, she's fired on the spot and gets a death threat from the criminals she has uncovered.

Before the day is over, she's received a locket left by the mother she never knew-the mother who was murdered when she was an infant. Within is a knotwork pattern, which has a hypnotic effect on her. Before she knows it, she's transported herself to a parallel Earth, a world where knights on horseback chase their prey with automatic weapons, and where world-skipping assassins lurk just on the other side of reality - a world where her true family runs things.

The six families of the Clan rule the kingdom of Gruinmarkt from behind the scenes, a mixture of nobility and criminal conspirators whose power to walk between the worlds makes them rich in both. Braids of family loyalty and intermarriage provide a fragile guarantee of peace, but a recently-ended civil war has left the families shaken and suspicious.

Taken in by her mother's people, she becomes the star of the story of the century-as Cinderella without a fairy godmother. As her mother's heir, Miriam is hailed as the prodigal countess Helge Thorold-Hjorth, and feted and feasted. Caught up in schemes and plots centuries in the making, Miriam is surrounded by unlikely allies, forbidden loves, lethal contraband, and, most dangerous of all, her family. Her unexpected return will supercede the claims of other clan members to her mother's fortune and power, and whoever killed her mother will be happy to see her dead, too.

Behind all this lie deeper secrets still, which threaten everyone and everything she has ever known. Patterns of deception and interlocking lies, as intricate as the knotwork between the universes. But Miriam is no one's pawn, and is determined to conquer her new home on her own terms.

Blending the creativity and humor of Roger Zelazny, the adventure of H. Beam Piper and Philip Jose Farmer, and the rigor and scope of a science-fiction writer on the grandest scale, Charles Stross has set a new standard for fantasy epics.

Charles Stross is the author of the bestselling Merchant Princes series, the Laundry series, and several stand-alone novels including "Glasshouse," "Accelerando," and "Saturn's Children." Born in Leeds, England, in 1964, Stross studied in London and Bradford, earning degrees in pharmacy and computer science. Over the next decade and a half he worked as a pharmacist, a technical writer, a software engineer, and eventually as a prolific journalist covering the IT industry. His short fiction began attracting wide attention in the late 1990s; his first novel, "Singularity Sky," appeared in 2003. He has subsequently won the Hugo Award twice. He lives with his wife in Edinburgh, Scotland, in a flat that is slightly older than the state of Texas.

"The Family Trade blows away any preconceptions with the introductory paragraph, and keeps the surprises coming to the very end. Fortunately, this is just the first book in what promises to be a very entertaining and tantalizing series. . . . Stross has created a world readers can believe in and a woman they will root for. She's tough, but compassionate. Brave, but not foolhardy. . . . Fantasy fans are going to eat this series up. With Stross's strong plotting and wonderful mingling of cultures, The Family Trade is poised to be a modern classic. Its fast, almost breathless, pace creates a rip current that submerges the reader in a world unlike any other and completely irresistible."-Black Gate

"Charles Stross's The Family Trade is an inventive, irreverent, and delightful romp into an alternate world where business is simultaneously low and high tech, and where romance, murder, marriage, and business are hopelessly intertwined -- and deadly."-L. E. Modesitt, Jr.

"The Family Trade is one of those rare delights--a book that is fun, intelligently written, and which leaves a reader breathlessly wondering what will happen next. Readers Beware: Stross weaves a tale that continually builds to an engrossing climax. Once you get into this, you'll find yourself hooked."-David Farland

"The Family Trade show that Charles Stross is no longer a beginner to watch, but a star to watch."-Mike Resnick

"At last, a story in which a character from our world is plunged into another, and doesn't act like a complete idiot. Miriam Beckstein is sharp-witted enough not to waste time trying to pretend that she can avoid the dilemmas that have been forced on her, while being human enough to let her emotions guide her into risky territory."

"Stross not only creates an alternate world that is fascinating and original, he even does the unheard of, for a fantasist: His depiction of our world is deep and real. Many a fantasist is able to create, or at least borrow from Tolkien, a reasonably interesting milieu in which the characters can cavort, but when they try their hand at showing something from the real world, like, in this case, the society of high finance, they embarrass themselves by revealing how little they know."

"No such problem with Stross. He knows this world backward and forward, and seems to have thought of everything. His characters behave in ways that make sense. They know all the things they should know, and don't know the things they shouldn't. The result is that we readers can trust this author completely, dive into this story and let it carry us wherever the current flows."

"Not to mention the fact that it's simply a great adventure, full of danger, of plots within plots, of forbidden love and political murder. Science fiction is in good hands with Charles Stross here to lead the new generation."-Orson Scott Card

"Quirky, original, and entertaining. The Family Trade could be the Godfather of all fantasy novels."-Kevin J. Anderson

"The Family Trade is one of those rare delights--a book that is fun, intelligently written, and which leaves a reader breathlessly wondering what will happen next."


"It's simply a great adventure, full of danger, of plots within plots, of forbidden love and political murder."


"With Stross's strong plotting and wonderful mingling of cultures, The Family Trade is poised to be a modern classic. Its fast, almost breathless, pace creates a rip current that submerges the reader in a world unlike any other and completely irresistible."