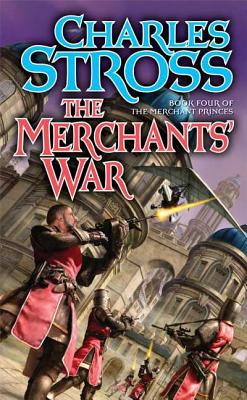 This is book number 4 in the Merchant Princes series.

The story of the worldwalkers just got stranger in Charles Stross's The Merchants' War. More worlds, more surprises. And there's a war going on ...

Miriam Beckstein is a young, hip, business journalist in Boston. She discovered in The Family Trade and The Hidden Family that her family came from an alternate reality, that she was very well-connected, and that her family was too much like the mafia for comfort. She found herself caught in a family trap in The Clan Corporate and betrothed to a brain-damaged prince, and then all hell broke loose.

Now, in The Merchants' War, Miriam has escaped to yet another world and remains in hiding from both the Clan and their opponents. There is a nasty shooting war going on in the Gruinmarkt world of the Clan, and we know something that Miriam does not; something that she's really going to hate--if she lives long enough to find out.

Charles Stross is the author of the bestselling Merchant Princes series, the Laundry series, and several stand-alone novels including Glasshouse, Accelerando, and Saturn's Children. Born in Leeds, England, in 1964, Stross studied in London and Bradford, earning degrees in pharmacy and computer science. Over the next decade and a half he worked as a pharmacist, a technical writer, a software engineer, and eventually as a prolific journalist covering the IT industry. His short fiction began attracting wide attention in the late 1990s; his first novel, Singularity Sky, appeared in 2003. He has subsequently won the Hugo Award twice. He lives with his wife in Edinburgh, Scotland, in a flat that is slightly older than the state of Texas.

“The world-building in this series is simply superb, in other words it is engaging, crystal-clear and disturbingly real..... The Merchants' War is fast-paced and engrossing and will leave readers ravenous for the next installment.” —SciFi.com

“Charlie Stross' latest is a brilliant, amusing, and challenging piece of mestizo fiction -- recklessly cross-breeding fantasy and SF tropes, and using the resulting bonfire to say interesting things about culture, economics, politics, and really cool battles with chain-mail and MP5's and horses and hang-gliders. Very real people with very different backgrounds meet and collide and strike lovely sparks. This series is great and getting better all the time!” —S.M. Stirling

“The action shifts rapidly among the three worlds in the fourth successive thriller in a fantastically thrilling series.” —Booklist