The Trade of Queens: Book Six of the Merchant Princes (Mass Market) 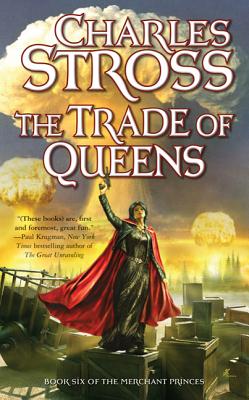 This is book number 6 in the Merchant Princes series.

A dissident faction of the Clan, the alternate universe group of families that has traded covertly with our world for a century or more, have carried nuclear devices between the worlds and exploded them in Washington, DC, killing the President of the United States. Now they will exterminate the rest of the Clan and keep Miriam Beckstein alive only long enough to bear her child, the heir to the throne of their land in the Gruinmarkt world.

The worst and deepest secret is now revealed: behind the horrifying plot is a faction of the US government itself, preparing for a political takeover in the aftermath of disaster. There is no safe place for Miriam and her Clan except, perhaps, in the third alternate world, New Britain--which has just had a revolution and a nuclear incident of its own.

Charles Stross's Merchant Princes series reaches a spectacular climax in this sixth volume. Praised by Nobel laureate Paul Krugman as "great fun," this is state of the art, cutting edge SF grown out of a fantastic premise.

“[These books] are, first and foremost, great fun.” —Paul Krugman, New York Times bestselling author of The Great Unraveling on the novels of The Merchant Princes

“If imagination is the key to success for a writer, Charles Stross has it in spades.” —The Times (London) on The Merchant Princes

“A good deal of fun. Fans of this series should find this conclusion satisfying and chilling.” —RT Book Reviews on Trade of Queens

“Stross effectively builds tension as the clock ticks down toward a hopeless confrontation between the Clan and its superpower opponent. . . The conclusion brings events in these three universes together successfully. . . This all makes for a more than satisfactory close to [the] series.” —Strange Horizons on the novels of The Merchant Princes

“The world-building in this series is simply superb, in other words—it is engaging, crystal-clear and disturbingly real. . . . The Merchants' War is fast-paced and engrossing and will leave readers ravenous for the next installment.” —SciFi Weekly on The Merchants’ War

“These books are immense fun, a sort of 21st-century version of the solid, thought-out costume sword-and-spaceship fiction that provided the enduring spine of science fiction entertainment .” —Locus on The Hidden Family