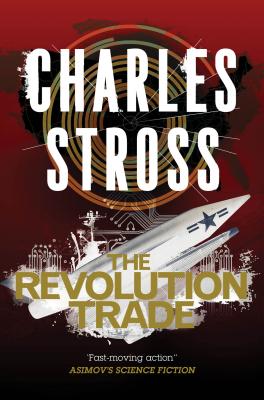 This is book number 3 in the Merchant Princes series.

Miriam Beckstein has said good-bye to her comfort zone. The transition from journalist to captive in an alternative timeline was challenging to say the least, she discovered that her long-lost family, the Clan, were world-skipping assassins. Now, while civil war rages in her adopted home, she's pregnant with the heir to their throne and a splinter group want her on their side of a desperate power struggle. But as a leader or figurehead?

Meanwhile, unknown to the Clan, the US government is on to them and preparing to exploit this knowledge. But it hadn't foreseen a dissident Clan faction carrying nuclear devices between worlds—with the US president in their sights. The War on Terror is about to go transdimensional. But Mike Fleming, CIA agent, knows the most terrifying secret of all: His government's true intentions.

"These books are immense fun."--Locus

CHARLES STROSS is a full-time science fiction writer and resident of Edinburgh, Scotland. He has won three Hugo Awards for Best Novella, including for the Laundry Files tale “Equoid.” His work has been translated into over twelve languages. His novels include the bestselling Merchant Princes series, the Laundry series (including Locus Award finalist The Dilirium Brief), and several stand-alones including Glasshouse, Accelerando, and Saturn's Children.

Like many writers, Stross has had a variety of careers, occupations, and job-shaped catastrophes, from pharmacist (he quit after the second police stakeout) to first code monkey on the team of a successful dot-com startup (with brilliant timing, he tried to change employers just as the bubble burst) to technical writer and prolific journalist covering the IT industry. Along the way he collected degrees in pharmacy and computer science, making him the world’s first officially qualified cyberpunk writer.