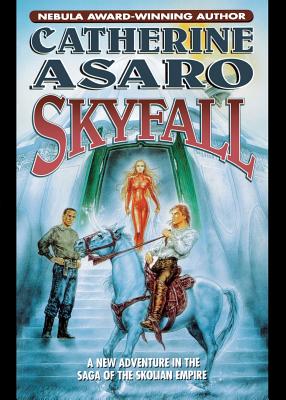 Catherine Asaro exploded onto the science fiction scene in 1995 with the publication of her widely acclaimed debut novel, Primary Inversion, which introduced readers to the vast and intricate far-future Saga of the Skolian Empire. She won widespread acclaim for her innovative blend of cutting-edge physics, interstellar intrigue, and passionate romance. Over the next few years she garnered nominations and awards in both SF and romance. Then in 2002, Catherine Asaro won the Nebula Award for Best Novel for The Quantum Rose, the sixth installment in her Saga of the Skolian Empire.

If you haven't caught on to the myriad pleasures to be found in this multiple award-winning epic SF series, here's the perfect chance. Skyfall goes back to the beginning, to the re-birth of Skolia, showing how a chance meeting on a backwater planet forged a vast interstellar empire.

Kurj, a provincial ruler on a primitive planet, is plagued by inner demons. But when he meets Roca, a beautiful and mysterious woman from the stars, he whisks her away to his mountain retreat, inadvertently starting a great interstellar war, and birthing the next generation of rulers for the Sklolian Empire.

Revel in the newest grand adventure of this Nebula Award-winning series.

“Asaro's Saga of the Skolian Empire has quietly become one of the most interesting, ambitious, and popular science-fiction series since Dune, captivating readers with its complex universe, its diverse cast of sympathetic characters, and its imaginative blend of hard SF, future history, military SF, space opera, family saga, and romance.” —Romantic Times

“Asaro has quickly gained a reputation as a writer of very colorful space operas. Her novels are notable for such typical space operatic virtues as (literally) larger-than-life heroes and heroines, truly bad villains, extravagant technology, star-spanning empires, and action-filled plots. I hope that description doesn't seem dismissive: On the contrary, Asaro really does make virtues of each of these characteristics. In addition, her novels feature significant romance subplots . . . first-rate rip-roaring adventures.” —SF Site

“This latest installment blends dynastic intrigue with theoretical physics to create a story that will appeal to fans of hard SF as well as grand-scale storytelling.” —Library Journal on Spherical Harmonic