Bringing Up Kids When Church Lets You Down: A Guide for Parents Questioning Their Faith (Hardcover) 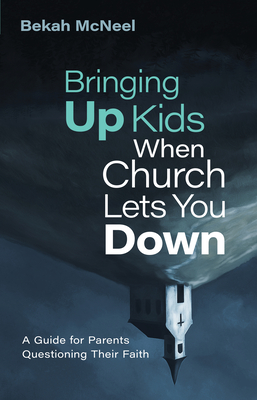 "This book is about the various places and ways that uncertainty shows up for parents who, having left or altered the faith they once knew, now must decide what to give their kids. It's about church attendance, Bible memorization, school choices, and sex talks. It's about forging new paths in racial justice and creation care while the intractable voices in your head call you a pagan Marxist for doing so."

After the spectacular implosion of her ministry career, Bekah McNeel was left disillusioned and without the foundation of certainty she had built her life on. But rather than leaving the Christian faith altogether, she hung out around the edges, began questioning oversimplified categories of black and white that she had been taught were sacred, and became comfortable living in gray areas while starting a new career in journalism.

Then she had kids.

From the moment someone asked if she was going to have her first child baptized, Bekah began to wonder if the conservative evangelical Christianity she grew up with was really something she wanted to give her children. That question only became more complicated when she had her second child months before White evangelicals carried Donald Trump to victory in the 2016 presidential election. Soon, Bekah found that other parents were asking similar questions as they broke with their fundamentalist religious upbringing and took on new values: Could they raise their kids to live with both the security of faith and the freedom of open-mindedness? To value both Scripture and social justice? To learn morality without shame?

In Bringing Up Kids When Church Lets You Down, Bekah gathers voices from history, scholarship, and her own community to guide others who, like her, are on a quest to shed the false certainty and toxic perfectionism of their past to become better, healthier parents--while still providing strong spiritual foundations for their children. She writes with humor and empathy, providing wise reflections (but not glib answers ) on difficult parenting topics while reminding us that we are not alone, even when we break away from the crowd.

Bekah McNeel is a journalist, wife, and mother of two. Her work has appeared in Christianity Today, Sojourners, Relevant, The Texas Tribune, ESPN's The Undefeated, The Christian Science Monitor, Texas Public Radio, and elsewhere. In addition to pieces about parenting, she writes about education, immigration, and faith communities-as well as the occasional op-ed calling the American evangelical church to lay down its idols of White supremacy and patriarchy.