City of Refugees: The Story of Three Newcomers Who Breathed Life into a Dying American Town (Paperback) 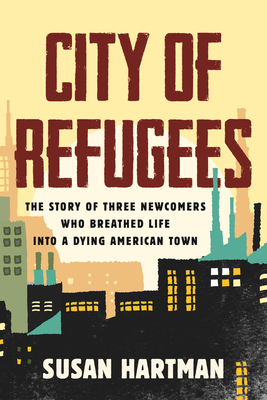 For readers of Caste, this intimate portrait of newcomers revitalizing a fading industrial town illuminates the larger canvas of refugee life in 21st century America

Many Americans imagine refugees as threatening outsiders who will steal jobs or be a drain on the economy. But across the country, refugees are rebuilding and maintaining the American Dream. In City of Refugees, journalist Susan Hartman shows how an influx of refugees helped revive Utica, New York, an old upstate manufacturing town that was nearly destroyed by depopulation and arson.

Hartman follows 3 of these newcomers over the course of 8 years as they and their families adjust to new lives in America. There’s Sadia, a bright, spirited Somali Bantu teenager who rebels against her formidable mother; Ali, an Iraqi translator who creates a home with a divorced American woman but is still traumatized by war; and Mersiha, a hard-working and ebullient Bosnian who dreams of opening a café.

They are part of an extraordinary migration of refugees from Vietnam, Bosnia, Burma, Somalia, Iraq, and elsewhere, who have transformed Utica over the past four decades—opening small businesses, fixing up abandoned houses, and adding a spark of vitality to forlorn city streets.

Other Rust Belt cities have also welcomed refugees, hoping to jump-start their economies and attract a younger population. City of Refugees is a complex and poignant story of a small city but also of America—a country whose promise of safe harbor and opportunity is knotty and incomplete, but undeniably alive.

Susan Hartman has written about immigrant communities for over 20 years. Her cover stories and profiles have appeared in the New York Times, the Christian Science Monitor, and Newsday. The author of two books of poetry, she was educated at Kirkland College and received an MFA from Columbia University’s School of the Arts, where she now teaches. She lives outside New York City with her husband; they have 2 grown children.

"Insightful and fascinating . . . will hone and reshape the reader's understanding of the impact of refugees on American society."
—Booklist

"Hartman draws an intimate and captivating portrait of the struggle to build new lives while holding on to old values. Readers will gain vital insight into the immigrant experience in America."
—Publishers Weekly

"Susan Hartman illuminates the humanity of these outsiders while demonstrating the crucial role immigrants play in the economy—and the soul—of the nation."
—Stuart Miller, Los Angeles Times

“With a keen eye for detail and a lot of heart, Hartman follows three refugees for eight years… Hartman crafts a nuanced narrative about each creating a new life in a new country while simultaneously holding onto memories of home and not losing their identity. The beauty of City of Refugees is that it tackles all the bad things that happen to these people while also reveling in their dreams and growth.”
—Gabino Iglesias, San Francisco Chronicle

"A gripping, fast-moving immersion into the lives of three bright new lights in a once fading town, City of Refugees is a meticulous and timely work of journalism."
—Dina Nayeri, author of The Ungrateful Refugee: What Immigrants Never Tell You

"This is an American tale that everyone should read—the story of three refugees who forged a new life in the Rust Belt. Hartman's journalistic dedication is nothing short of astounding. She spent eight years following her subjects, and it shows. The storytelling is so intimate and the characters feel so deeply real that you will know them like neighbors. Sadia, who is a teenage girl when the book begins, is like the heroine of a great young adult novel. You will root for her on every page, and by the end, you will not be able to wall off your heart from her hopes and dreams."
—Jake Halpern, author of Welcome to the New World

"Susan Hartman's City of Refugees is storytelling at its very best. Her detailed portrait of the ordinary lives of a few extraordinary people and their community gives us an utterly compelling glimpse into the heart and soul of the United States of America in the twenty-first century."
—Jenny McPhee, author and translator

"What a wonderful book! In this remarkably nuanced portrait of three refugees, Susan Hartman manages a skillful end run around the topic's usual politicized discourse. Instead, she concentrates on her subjects' current and past experiences, including religious persecutions, wars, physical danger, and their ambitions, confusions, joys, and fears."
—Lis Harris, author of In Jerusalem: Three Generations of an Israeli Family and a Palestinian Family

"City of Refugees is a tender, intimate, and important book—a carefully reported rebuttal to the xenophobic narratives that define so much of modern American politics and a gripping portrait of what three different refugees have offered the city of Utica through their labors of love."
—Sarah Stillman, staff writer, The New Yorker

"Susan Hartman has written a vital book about the refugee experience in America. With spare and direct prose, she captures the daily joys and heartaches of three refugee families. This is a story of the tenacity of family bonds and the underappreciated contributions of refugees to the vitality of American life. I loved every single page."
—Jen Percy, author of Demon Camp: The Strange and Terrible Saga of a Soldier's Return from War