The Whiskey Rebels: A Novel (Paperback) 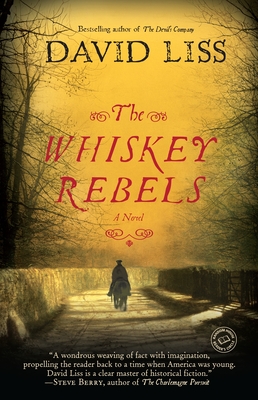 “Filled with historical accuracy, intriguing characters and an engaging plot, The Whiskey Rebels is set in the Federalist period, following the Revolutionary War. The book is uniquely arranged around two characters: Ethan Sanders, a disgraced Revolutionary War spy who has hit rock bottom in his life, and Joan Maycott, a Pennslyvanian immigrant who has lost everything she cared about and seeks revenge. Toggling back and forth between their stories, Liss masterfully weaves a story that eventually connects these two characters with Alexander Hamilton and his whiskey tax, an effort that eventually ends in the Whiskey Rebellion. It's a history lesson that's not dry or wrought with names and dates to remember, but one that will keep you turning the pages right up until the end.”
— Bunny Thompson, Paulina Springs Books, Sisters, OR

“David Liss has always written incredible historical novels, but The Whiskey Rebels is his best yet. Beginning in 1792, the story features a former Revolutionary War spy, with action that moves between New York, Philadelphia, and the western frontier of Pennsylvania, involving Alexander Hamilton and the establishment of the Bank of the United States. No American history buff, or lover of a well-crafted novel, should miss this one.”
— Deal Safrit, Literary Book Post, Salisbury, NC

America, 1787. Ethan Saunders, once among General Washington’s most valued spies, is living in disgrace after an accusation of treason cost him his reputation. But an opportunity for redemption comes calling when Saunders’s old enemy, Alexander Hamilton, draws him into a struggle with bitter rival Thomas Jefferson over the creation of the Bank of the United States.

Meanwhile, on the western Pennsylvania frontier, Joan Maycott and her husband, a Revolutionary War veteran, hope for a better life and a chance for prosperity. But the Maycotts’ success on an isolated frontier attracts the brutal attention of men who threaten to destroy them.

As their causes intertwine, Joan and Saunders–both patriots in their own way–find themselves on opposing sides of a plot that could tear apart a fragile new nation.

David Liss is the author of The Whiskey Rebels, The Ethical Assassin, A Spectacle of Corruption, The Coffee Trader, and A Conspiracy of Paper, winner of the Edgar Award for Best First Novel. He lives in San Antonio with his wife and children.

“A gripping, visceral adventure of revenge, ambition, and romance filled with surprising twists and insights.”—Matthew Pearl, author of The Last Dickens

“A breathtaking, breakneck tale told from the interwoven viewpoints of a top Revolutionary spy and a brilliant and cunning woman who becomes both his ally and his nemesis.”—Katherine Neville, author of The Fire and The Eight

“What a wonderful book! An absorbing and entertaining novel of the American Revolution.”—Jon Meacham, author of American Lion