Amado Muro and Me: A Tale of Honesty and Deception (Paperback) 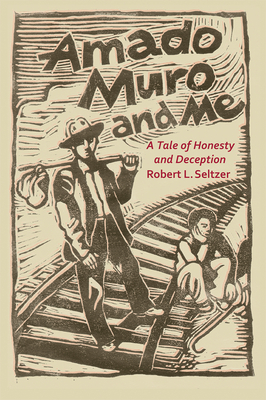 By Robert Seltzer
Email or call for price.
Special Order

In Amado Muro and Me, ten-year-old Robert Seltzer discovers that his father, Chester, actually leads two lives—one as a newspaperman and father who somehow always knows what his son is thinking; the other as Amado Muro, a passionate and gifted writer whose pseudonym is adapted from the name of his Mexican immigrant wife. Chester was born in Cleveland, Ohio, but in Amado Muro’s stories, he channels an intense love of Mexican culture to create deep, strong roots in Chihuahua, Mexico. Throughout the pivotal year of this memoir, the family moves from El Paso, Texas, (home to Robert’s Mexican grandmother, Alita, and always home to Robert) to Bakersfield, California. Robert experiences everything from bullying and young love to racism and cross-culturalization. Chester guides his son through this difficult period with the wisdom he gained from the “dark turn” he himself faced as a young man. Robert, who knows his father as “the old man,” now begins to learn about “Young Chess.” Tying it all together is Amado Muro, who from time to time abandons Robert and his mother and hops freight trains in order to write his wonderful stories. Reaching beyond background research, Chester’s alter ego lives the life in order to share the tale. Robert’s ethnicity is the result of his mother’s ancestry, but his father chooses his Mexican identity. It is through this perspective, as a man who sees bridges where others see barriers, that the father helps his son deal with his first, jarring experience of racism and so much more.

A native of El Paso, Texas, ROBERT L. SELTZER earned a journalism degree from the University of Texas at El Paso. He has worked for newspapers such as the Houston Chronicle, the Philadelphia Inquirer, and the San Antonio Express-News, where he is currently the public editor. He has won state and national awards for his news, feature, and sports reporting.

"Robert Seltzer has given us a wonderful gift: a wise and compassionate memoir about growing up the son of Amado Muro, the near-mythical writer from the Mexican border whose very life turned the concept of race and identity upside down. As the author comes to terms with the duality of his father, he begins to comprehend his own life. Yet, the more we learn, the more the mystery of Amado Muro deepens – and ultimately redefines what it means to live on the border." --Rus Bradburd, author of the forthcoming book, All the Dreams We’ve Dreamed