Growing Up in the Lone Star State: Notable Texans Remember Their Childhoods (Hardcover) 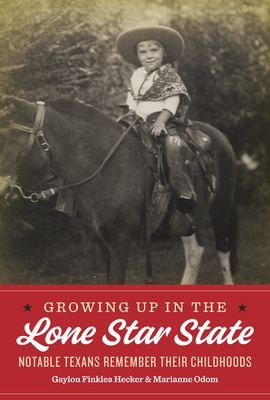 Gaylon Finklea Hecker and Marianne Odom began the interviews for this book in 1981 and devoted a professional lifetime to collecting the memories of accomplished Texans to determine what, if anything, about growing up in the Lone Star State prepared them for success.

The resulting forty-seven oral history interviews begin with tales from the early 1900s, when Texas was an agrarian state, and continue through the growth of major cities and the country’s race to the moon. Interviewees recalled life in former slave colonies; on gigantic ranches, tiny farms, and sharecropper fields; and in one-horse towns and big-city neighborhoods, with relatable stories as diverse as the state’s geography.

The oldest interviewees witnessed women earning the right to vote and weathered the Great Depression. Many remembered two world wars, while others recalled the Texas City explosion of 1947 and the tornado that devastated Waco in 1953. They witnessed the advent of television and the nightly news, which helped many come to terms with the assassination of a president that took place too close to home.

Their absorbing reflections are stories of good and bad, hope and despair, poverty and wealth, depression and inspiration, which would have been different if lived anywhere but Texas.

Journalists Gaylon Finklea Hecker and Marianne Odom have been collecting oral histories since 1981 and previously collaborated on The Businesses That Built San Antonio. Finklea Hecker is the author of four books about Texas history. Odom is a journalism professor at San Antonio College.

An excellent book of oral history...This is an engaging book to read, with 47 Texans from various walks of life talking about their Texas childhoods.
— Abilene Reporter-News

[Growing Up in the Lone Star State] captures the grit, determination, hardships and joys of growing up in a land of opportunity.
— San Antonio Express-News